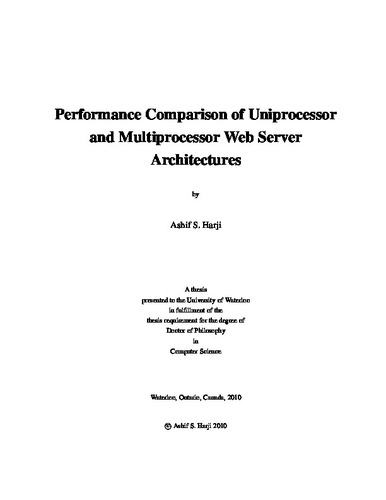 This thesis examines web-server architectures for static workloads on both uniprocessor and multiprocessor systems to determine the key factors affecting their performance. The architectures examined are event-driven (userver) and pipeline (WatPipe). As well, a thread-per-connection (Knot) architecture is examined for the uniprocessor system. Various workloads are tested to determine their effect on the performance of the servers. Significant effort is made to ensure a fair comparison among the servers. For example, all the servers are implemented in C or C++, and support sendfile and edge-triggered epoll. The existing servers, Knot and userver, are extended as necessary, and the new pipeline-server, WatPipe, is implemented using userver as its initial code base. Each web server is also tuned to determine its best configuration for a specific workload, which is shown to be critical to achieve best server performance. Finally, the server experiments are verified to ensure each is performing within reasonable standards. The performance of the various architectures is examined on a uniprocessor system. Three workloads are examined: no disk-I/O, moderate disk-I/O and heavy disk-I/O. These three workloads highlight the differences among the architectures. As expected, the experiments show the amount of disk I/O is the most significant factor in determining throughput, and once there is memory pressure, the memory footprint of the server is the crucial performance factor. The peak throughput differs by only 9-13% among the best servers of each architecture across the various workloads. Furthermore, the appropriate configuration parameters for best performance varied based on workload, and no single server performed the best for all workloads. The results show the event-driven and pipeline servers have equivalent throughput when there is moderate or no disk-I/O. The only difference is during the heavy disk-I/O experiments where WatPipe's smaller memory footprint for its blocking server gave it a performance advantage. The Knot server has 9% lower throughput for no disk-I/O and moderate disk-I/O and 13% lower for heavy disk-I/O, showing the extra overheads incurred by thread-per-connection servers, but still having performance close to the other server architectures. An unexpected result is that blocking sockets with sendfile outperforms non-blocking sockets with sendfile when there is heavy disk-I/O because of more efficient disk access. Next, the performance of the various architectures is examined on a multiprocessor system. Knot is excluded from the experiments as its underlying thread library, Capriccio, only supports uniprocessor execution. For these experiments, it is shown that partitioning the system so that server processes, subnets and requests are handled by the same CPU is necessary to achieve high throughput. Both N-copy and new hybrid versions of the uniprocessor servers, extended to support partitioning, are tested. While the N-copy servers performed the best, new hybrid versions of the servers also performed well. These hybrid servers have throughput within 2% of the N-copy servers but offer benefits over N-copy such as a smaller memory footprint and a shared address-space. For multiprocessor systems, it is shown that once the system becomes disk bound, the throughput of the servers is drastically reduced. To maximize performance on a multiprocessor, high disk throughput and lots of memory are essential.