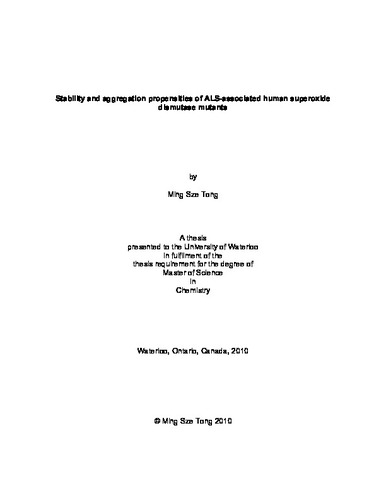 Amyotrophic lateral sclerosis (ALS) is the most common motor neuron disease and is characterized by progressive paralysis leading to death, typically, within 3-5 years of the onset of symptoms. The majority of ALS cases are sporadic with no known causative agent; however, 5-10% of ALS cases are genetically inherited and termed familial ALS (fALS). Approximately, 15-20% of these fALS cases have been linked to mutations in the gene encoding human Cu/Zn superoxide dismutase (hSOD). To date, over 140 hSOD mutations have been discovered. The mechanisms by which mutant hSOD confers toxicity in fALS patients are still unknown. However, there is growing evidence that ALS is a type of protein conformational disease whereby cell damage or death is caused by the accumulation of protein aggregates in the cell. It is hypothesized that mutations destabilise hSOD and increase its propensity to aggregate. There is some controversy as to which hSOD species contributes to aggregation. Many believe that only apo or mismetallated forms of hSOD are able to aggregate. Due to the abundance of fully metallated or holo hSOD in the cell, we hypothesize that holo hSOD can also lead to aggregation. Holo dimer interface mutants A4S, A4T and I113T as well as G41D were found to be destabilized compared to holo pseudo wildtype (pWT) while zinc binding mutant H80R was shown to form fragments via an unknown mechanism. Holo dimer interface mutants A4S and A4T were also shown to have an increased propensity to aggregate compared to pWT, which correlates to their decreased stability as well a short disease durations.