EMS Response Time Models: A Case Study and Analysis for the Region of Waterloo 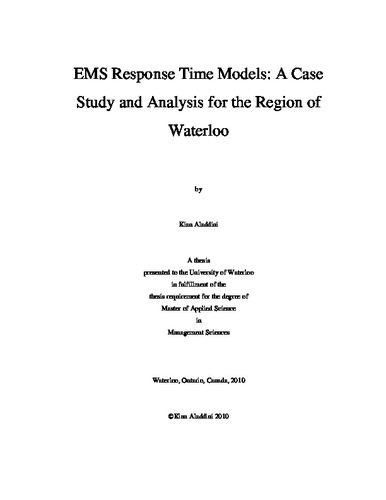 Ambulance response time is a key measure used to assess EMS system performance. However, the speed with which ambulances respond to emergencies can be highly variable. In some cases, this is due to geography. In dense urban areas for example, the distances traveled are short, but traffic and other hindrances such as traffic calming measures and high rise elevators cause delays, while rural areas involve greater distances and longer travel times. There are two major components of response time: first, pre-travel delay to prepare for ambulance dispatch, and second the actual travel time to the callers location. Response time standards are often established in order to provide fast and reliable service to the most severely ill patients. Standards typically specify the percentage of time an emergency response team can get to a call within a certain time threshold. This is referred to as “coverage”. This thesis deals with the development of a new response time model that predicts not only the mean response time, but estimates its variability. The models are developed based on historical data provided by the Region of Waterloo EMS and will permit the Region to predict EMS coverage. By analyzing the historical data, we found that response times from EMS stations to geographical locations within the Region of Waterloo are characterized by lognormal distributions. For a particular station – location pair we can thus use this information to predict coverage if we are able to specify the parameters of the distribution. We do this by characterizing the travel time and pre-travel delay times separately, and then adding the two to estimate coverage. We will use a previously proposed model that estimates the mean travel time from a station to a demand point as a function of road types traversed. We also compare the results of this model with another well known model and show that the first model is suitable to apply to the Region of Waterloo. In order to estimate the standard deviation of the response time, we propose a simple but effective model that estimates the standard deviation as a function of mean response time.