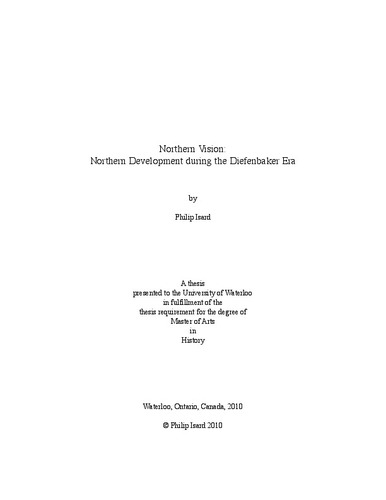 At the inauguration of John G. Diefenbaker’s 1958 election campaign, the Prime Minister announced his ‘Northern Vision,’ a bold strategy to extend Canadian nationhood to the Arctic and develop its natural resources for the benefit of all Canadians. In some ways, the ‘Northern Vision’ was a political platform, an economic platform as well as an ideological platform. Invigorated by Diefenbaker’s electoral victory in 1958, the Department of Northern Affairs and National Development (DNANR) implementing the ‘National Development Policy’ in 1958 and announced the ‘Road to Resources’ program as a major effort to unlock the natural resource potential of the Canadian north. From 1958 to 1962, DNANR implemented additional northern development programs that planned to incorporate the northern territories along with Canada’s provinces, redevelop several key northern townsites, and stimulate mining activity across Northern Canada. As a result of serious government oversight and unforeseen developments, Diefenbaker abandoned his ‘Northern Vision’ and direction of northern development in 1962. Within the broader context of northern development over the past half century, the ‘Northern Vision’ produced several positive outcome which advanced the regional development of the Arctic. This thesis will examine the ‘Northern Vision’ by evaluating Diefenbaker’s political platform, the development of the ‘National Development Policy,’ and the regional outcomes of key northern development projects initiated by the Diefenbaker administration. The ‘Vision’ was never anticipated to bring about immediate results for Canadians and many objectives were eventually completed by consecutive Liberal governments. Moreover, the socioeconomic and military conditions of the Canadian north, at the time, appears to be significant factor in the implementation of this policy. This thesis also evaluates how natural resource operations propelled developments in territorial administration, housing, transportation, and fostered a wider participation of private enterprise across northern Canada. The ‘Northern Vision’ represents an overlooked period in the federal government’s administration of the Arctic and a critical event in the region’s development over the past fifty years.