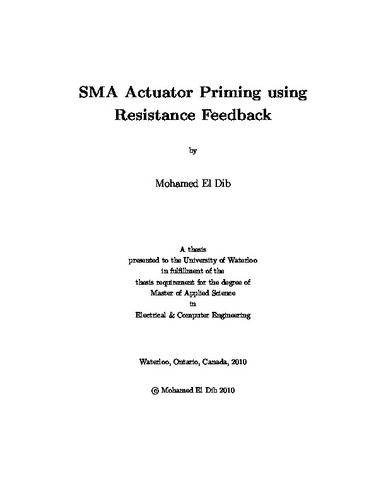 Shape memory alloys (SMAs) are a group of alloys that demonstrate the unique ability of returning back to a previously defined shape or size if subjected to the appropriate thermal procedure. They have been implemented as actuators in a wide range of applications spanning several fields such as robotics, aeronautics, automotive and even in medicine. Several controllers, linear and nonlinear, have been designed to control these actuators. However, controlling these actuators is no simple task as they are highly nonlinear due to the hysteresis inherent in them. In fact, their control depends on two important factors: the thermal conditions they are subjected to and the stress applied to them. The former can be further divided into air flow and ambient temperatures. These thermal conditions determine the amount of power needed to heat the SMA wire. In the SMA data sheets, manufacturers specify what they refer to as the "safe current" which is the maximum current value that can be applied to the SMA wire indefinitely without burning it. However, they specify this current value at room temperature and under certain convection conditions. In the work presented here, the focus was the control of SMA actuators under different ambient temperatures. Thus, in this research, the main goal was to design and implement a controller that will actuate, or contract, the SMA wire in approximately the same amount of time regardless of the ambient temperatures with a fixed load applied to it.