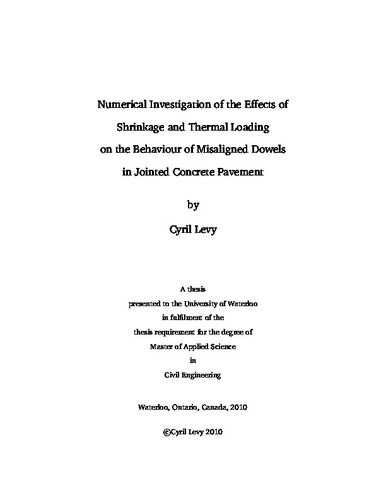 Dowel bars in jointed plain concrete pavement (JPCP) have the important function of transferring wheel loads from one slab to the other, hence ensuring that the deflections on each side of the joint are kept almost equal. As well, the dowels should not impede the concrete pavement movements due to environmental effects (temperature and moisture). Dowel bar misalignment, attributed to deficient construction practice, is a major cause of joint distress or faulting by inhibiting the free movement of the slab at the joint. To prevent these issues, tolerance guidelines on misalignment levels are implemented by transportation agencies. Review of previous studies indicate that many researchers analysed the effects of dowel bar misalignment on pavement behaviour using a pull-out test, that is a forcebased opening of the joint. These approaches neglect that joints movements in the field are strain-governed by non-linear temperature and shrinkage actions, leading to combined axial movements and curling of the slab. In this study, the fundamental dowel bar behaviour under shrinkage and thermal loading was determined through detailed 3D finite element modelling (3D-FEM). To that end, models of dowel jointed concrete slabs were developed and subjected to realistic non-linear profiles of shrinkage and thermal strains. Studies were carried out on a single-bar model, taking into account bar-concrete friction and plastic concrete behaviour. The parameters that were investigated included different configurations and levels of bar misalignment and different friction coefficients between the steel and the concrete, simulating the use of bond-breakers. To interpret the results from the numerical analysis, criteria for concrete damage were developed and used in parallel with measures of joint load transfer efficiency; these were obtained by examining the response of the slab under a Falling Weight Deflectometer (FWD) drop at the joint. The results were verified by comparing the outputs of a model consisting of one half of a slab to published data. The analysis of the models revealead that none of the models showed signs of significant damage after the application of shrinkage and two thermal cycles. Analyses with up to ten thermal cycles did not indicate progressive accumulation of damage, suggesting that for the chosen parameters there is no the concrete around the dowel bar will not fail. Models with bars placed higher in the slab and bars with angular misalignment exhibited more damage than the non-misaligned models without reaching the damage criteria used in this study. The models did not exhibit the amount of damage reported in the studies on dowel bar misalignment having used pull-out tests. It was found that no significant difference existed between uncoated and coated dowel bars models results with regards to concrete damage at the joint. However, a high coefficient of friction between the dowel and the concrete, simulating dowel bar corrosion, proved to be the most detrimental to joint integrity. All of the models performed very well with respect to joint load transfer efficiency, suggesting that the plastic strains in the concrete around the dowel did not have a significant impact on joint performance for the realistic range of parameters investigated.

Cyril Levy (2010). Numerical Investigation of the Effects of Shrinkage and Thermal Loading on the Behaviour of Misaligned Dowels in Jointed Concrete Pavement. UWSpace. http://hdl.handle.net/10012/5028