A novel approach to restoration of Poissonian images 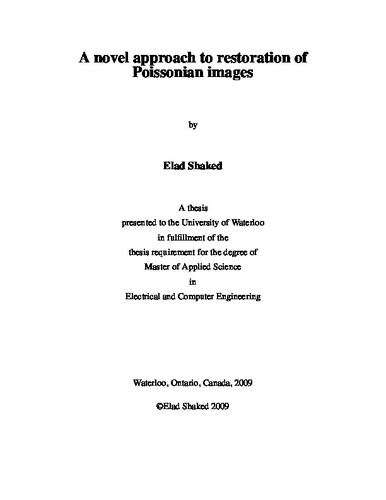 The problem of reconstruction of digital images from their degraded measurements is regarded as a problem of central importance in various fields of engineering and imaging sciences. In such cases, the degradation is typically caused by the resolution limitations of an imaging device in use and/or by the destructive influence of measurement noise. Specifically, when the noise obeys a Poisson probability law, standard approaches to the problem of image reconstruction are based on using fixed-point algorithms which follow the methodology proposed by Richardson and Lucy in the beginning of the 1970s. The practice of using such methods, however, shows that their convergence properties tend to deteriorate at relatively high noise levels (which typically takes place in so-called low-count settings). This work introduces a novel method for de-noising and/or de-blurring of digital images that have been corrupted by Poisson noise. The proposed method is derived using the framework of MAP estimation, under the assumption that the image of interest can be sparsely represented in the domain of a properly designed linear transform. Consequently, a shrinkage-based iterative procedure is proposed, which guarantees the maximization of an associated maximum-a-posteriori criterion. It is shown in a series of both computer-simulated and real-life experiments that the proposed method outperforms a number of existing alternatives in terms of stability, precision, and computational efficiency.