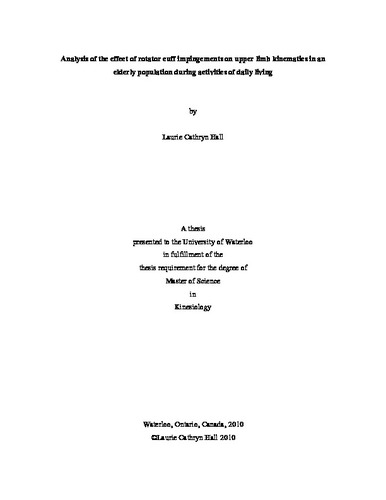 Despite a large prevalence of rotator cuff impingements or tears in the elderly population, little research has focused on understanding how this population adapts to perform tasks of daily living. Past research has focused on the analysis of upper limb kinematics of young healthy individuals while performing these essential tasks (Magermans, 2004, Murray and Johnson., 2004). The purpose of this thesis was to identify kinematic and shoulder loading differences between elderly mobile individuals and elderly individuals with rotator cuff impingements during specific activities of daily living. Motion capture techniques were used in combination with the Shoulder Loading Analysis Modules (Dickerson, 2005, Dickerson et al., 2007) to estimate thoracohumeral kinematics and calculate external joint moments. Two-tailed t-tests with injury status as the factor determined that differences in active range of motion in flexion/extension and humeral rotations existed between the two populations. Results of the ADL analysis showed that the impinged population tended to have decreased plane of elevation and humeral rotations during ADLs. Task was also a main factor for most variables examined. Perineal care, hair-combing and reaching tasks were the most demanding in terms of range of motion necessary to complete the task. The reaching tasks resulted in the highest shoulder moment. K-means clustering techniques proved to be unsuccessful in identifying different motion strategies between the two study groups. This investigation showed that developing adaptations for perineal care, hair-combing and reaching tasks should be considered a priority when working with patients with rotator cuff impingements, as these tasks demanded the largest ranges of motion as well as high shoulder moments.

Laurie Cathryn Hall (2010). Analysis of the effect of rotator cuff impingements on upper limb kinematics in an elderly population during activities of daily living. UWSpace. http://hdl.handle.net/10012/5026