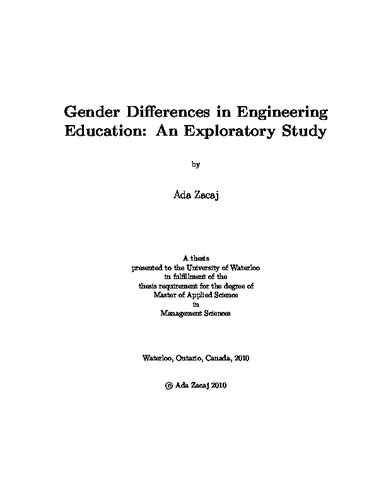 Despite significant efforts to boost female enrollment levels and retention rates in engineering programs, females continue to make up only a small portion of the Canadian undergraduate engineering student population. However, this traditionally-male field is undergoing a culture change as a result of the recent establishment of a female minority. New initiatives that are encouraging women to enter the field are also challenging assumed gender differences previously used to legitimize women's low participation. Through a series of multiple-choice, scenario-based questionnaires, this exploratory study seeks to establish whether or not gender differences observed in the broader population are applicable to the unique engineering undergraduate population at the University of Waterloo. In particular, respondents are quizzed on their preferences for specific job attributes and aspects of life outside of work. In addition, short-answer open-ended questions are used to gauge the level of integration experienced by female students in the faculty. Attention is paid to the general academic and social engineering environment as well as the specific dynamics of mixed-gender groups. Although some gender differences, such as higher preference for earnings on the part of males and work-life balance on the part of females, are in line with previous findings, other differences are found to be either absent or reversed. A surprising side effect of our culturally-diverse sample is the emergence of cultural background as a strong factor which, besides gender, affects work and life attribute preferences, especially preferences for task challenge and earnings. Another interesting outcome of the study is the resulting asymmetry between factors that respondents acknowledge as contributing to their happiness, and factors, which when absent, are found to contribute to the respondents' unhappiness. The study also reveals that female engineering students find themselves in a balancing act between perceived privileges due to their minority, and reduced participation and decision making power due to perceptions of engineering projects as stereotypically in the male domain.