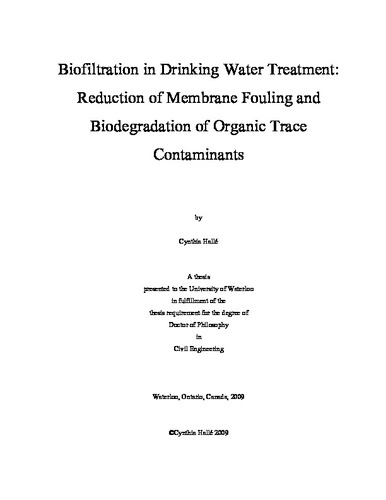 The goal of drinking water treatment is to produce and deliver safe water to the consumers. To achieve these objectives water treatment plants are designed based on the concept of the multibarrier approach which combines several drinking water treatment processes in order to increase the reliability of the system. The presence of pharmaceutically active compounds (PhACs), personal care products (PCPs) and endocrine disrupting compounds (EDCs) in drinking water sources is becoming a concern, because of chronic and indirect human exposure to contaminant mixtures at sub-therapeutic levels via drinking water consumption. Membrane filtration can be an efficient treatment process to remove microorganisms and/or trace organic contaminants from drinking water sources. However, membranes are confronted by a major limitation: membrane fouling. Fouled membranes suffer from a loss in performance either leading to a reduction in flux or a higher pressure requirement. Generally, membrane fouling increases the need for membrane maintenance measures such as backwashing and chemical cleaning which has a negative impact on the operating costs and membrane life time. Severe membrane fouling may even impact permeate quality and/or compromise membrane integrity. The aim of this study was to establish if biofiltration pretreatment without prior coagulation would be able to control membrane fouling in natural waters. The second objective investigated the removal of trace organic contaminants by individual treatment processes (i.e. biofiltration and membrane filtration). Parallel to this work, the presence and concentration of selected trace organic contaminants in Grand River (Ontario, Canada) were determined. The trace organic contaminants investigated included atrazine, carbamazepine, DEET, ibuprofen, naproxen, and nonylphenol. Direct biofiltration pretreatment (no coagulation) significantly reduced both reversible and irreversible fouling of ultrafiltration membranes. Results showed that the different degree of reduction of hydraulically reversible fouling was primarily attributed to the absolute concentration of a specific fraction of the dissolved organic matter (i.e. biopolymers) in the biofilter effluent (i.e. membrane feed). The study also suggests that the composition of biopolymers rather than their absolute concentration is important for the control of irreversible fouling. High pressure membranes such as nanofiltration membranes are also subjected to fouling. Results showed that biofiltration pretreatment was able to achieve fouling control but membrane characteristics (i.e. molecular weight cut off) influence the efficiency of the pretreatment. This study also showed that not only biopolymers but also humic substances and low molecular weight acids are being rejected by nanofiltration membranes. Selected trace organic contaminants were detected in Grand River water in the low ng/L range with detection frequencies between 48 to 100%. Seasonal occurrence patterns could be explained by compound use and possible degradation mechanisms. These results confirm the impact of human activities on the Grand River. This study showed that under the right conditions rapid biofiltration is capable of completely removing biodegradable emerging contaminants at ng/L concentrations. DEET, ibuprofen, and naproxen were biodegradable and therefore amenable to removal while carbamazepine and atrazine were recalcitrant. Factors such as empty bed contact time, influent concentration, and temperature influenced the biodegradation kinetics. Finally, both membrane and contaminant properties influenced the degree of rejection achieved by nanofiltration membranes. Results showed that steric hindrance and electrostatic repulsion were the major rejection mechanisms. Several benefits are associated with the use of direct biofiltration for drinking water treatment. These benefits include: the removal of easily biodegradable organic matter leading to biologically stable effluents; the removal of biodegradable trace organic contaminants contributing to the multibarrier approach; the absence of chemicals coagulation which is of advantage for operations in isolated areas; the simple operation and maintenance which is an advantage for locations with limited trained operators; and finally if used prior to membrane filtration biofiltration pretreatment can control membrane fouling.