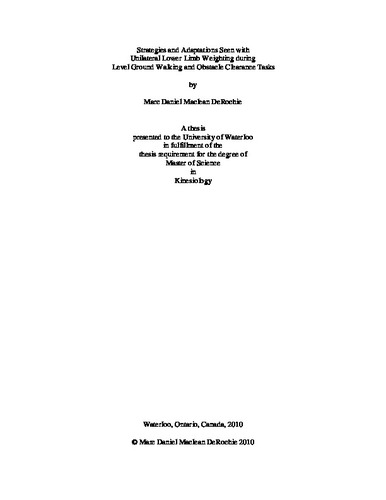 Abstract: Previous lower limb weighting studies have placed a load on the legs bilaterally and tested different placement locations. It was previously determined that kinematic changes occur with greater masses and at joints proximal to weight placement [1]. Other studies have determined that these changes exist for a short adaptation period before parameters revert to a steady state [2]. Tasks that require voluntary gait modifications such as obstacle clearance have also been performed with lower leg bilateral weight addition [4]. In cases of normal obstacle clearance increased flexion at all three joints in the lower limb is needed to safely traverse the obstacle [3]. The goal of this study was to investigate joint kinematics and kinetics of unilaterally weighted participants using level ground force platform collection techniques, rather than a treadmill. It was hoped that this would allow for new insight into the adaptation periods and strategic motor pattern changes seen at the ankle, knee and hip. Kinematic and force platform data were collected on two groups of 10 healthy male subjects. Group 1 (mean age = 23years, mean weight = 82.181kg, mean height = 1.798m) was a normal walking group and group 2 (mean age = 24.8years, mean weight = 79.901kg, mean height = 1.773m) was an obstacle clearance group. Both groups participated in 20 trials each of three different conditions; normal, weighted and weight off using a 2.27kg limb mass attached just proximal to the right maleoli markers. A repeated-measures two-way ANOVA was carried out on relevant variables in order to determine statistical significance. Weight addition and removal affected the kinematics and kinetics of the normal walking and obstacle clearance groups. This effect was more prominent in the normal walking group. If changes were seen, trials 1 through 3 were the locations showing a quick adaptation followed by a leveling off back to a new steady state in later trials. Participants in the normal walking group chose to utilize the hip joint in order to control for weight addition and removal. Kinematically, changes in the hip joint angle occurred at all instances analyzed throughout the gait cycle with this effect being more prominent in the weight off condition. In conjunction with this, the hip joint energy generation increased during all phases of the gait cycle while the ankle and knee joints either decreased energy generation or increased energy absorption. In the obstacle group, participants also chose to increase flexion at the hip joint. However, the ankle joint also had either decreased plantarflexion or increased dorsiflexion at all the instances analyzed during the gait cycle. However, joint energy generation increases at these joints were only found during stance and at heel contact. The toe obstacle clearance values also showed a marked increase in trial 1 for the weighted condition which demonstrates a voluntary gait modification made by participants to safely traverse the obstacle that was quickly adapted for. Overall, the results found by previous studies using treadmill collection techniques were still seen in overground force platform data but they were not as robust. References: 1.Martin PE et al. J Biomech. 1990; 23(6):529-536. 2.Noble et al. Exp Brain Res. 2006; 169: 482-495. 3.Patla AE et al. Exp Brain Res. 1995; 196: 499-504. 4.Reid MJ et al. Neurosci Res Comm. 2001; 29(2): 79-87.