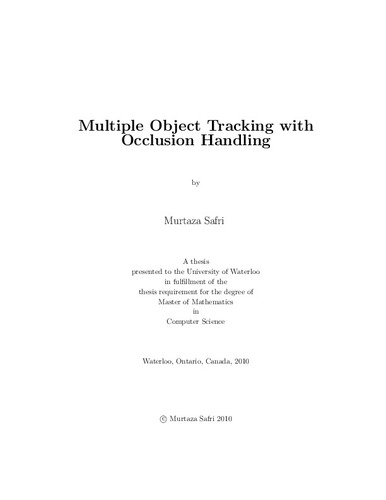 Object tracking is an important problem with wide ranging applications. The purpose is to detect object contours and track their motion in a video. Issues of concern are to be able to map objects correctly between two frames, and to be able to track through occlusion. This thesis discusses a novel framework for the purpose of object tracking which is inspired from image registration and segmentation models. Occlusion of objects is also detected and handled in this framework in an appropriate manner. The main idea of our tracking framework is to reconstruct the sequence of images in the video. The process involves deforming all the objects in a given image frame, called the initial frame. Regularization terms are used to govern the deformation of the shape of the objects. We use elastic and viscous fluid model as the regularizer. The reconstructed frame is formed by combining the deformed objects with respect to the depth ordering. The correct reconstruction is selected by parameters that minimize the difference between the reconstruction and the consecutive frame, called the target frame. These parameters provide the required tracking information, such as the contour of the objects in the target frame including the occluded regions. The regularization term restricts the deformation of the object shape in the occluded region and thus gives an estimate of the object shape in this region. The other idea is to use a segmentation model as a measure in place of the frame difference measure. This is separate from image segmentation procedure, since we use the segmentation model in a tracking framework to capture object deformation. Numerical examples are presented to demonstrate tracking in simple and complex scenes, alongwith occlusion handling capability of our model. Segmentation measure is shown to be more robust with regard to accumulation of tracking error.