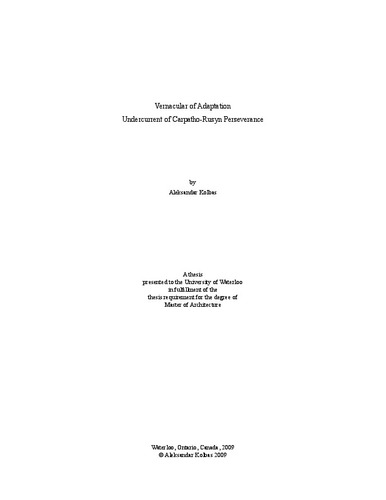 In the nineteen nineties, former Yugoslavia, went through a series of interstitial disputes, both religious and political, which evolved into hatred amongst its own people and ultimately into an unforgiving civil war. Rising demonstrations of the groups with different religious and cultural views within the country’s boundaries amalgamated into a war which divided the state into separate countries and left many cities and villages in despair, economic desolation and poverty. Although some have been directly affected by the physical casualties of war, others have suffered indirectly. One of the villages affected is Ruski Kerestur, found in the Republic of Serbia where more than ninety percent of the residents are non-Serbian. Many of its people fled the country due to political and economic uncertainties. This minority group is of the Carpatho-Rusyn decent which are the heart and soul of the village. Inspired by personal motive and desire to heal communities in distress, this thesis presents an opportunity to reconcile Carpatho-Rusyn people from the social diaspora in attempt to reclaim their national identity and give them the courage to persist on and continue the cultural legacy that has been nurtured for generations. Leaning on the speculation that ‘a spirit in people and belief in the future comes from the very foundation of a building’; it utilizes an architectural intervention as basis to conceive a quintessential communal space that redefines social and practical functions necessary for cultivating Rusyn traditions, ethics and domestic values. To develop an understanding of their public realm, the thesis dips into the crevices of time searching for Carpatho-Rusyn progress of development and migratory movement from their homeland in the Carpathian Mountains to the present day conditions. It tends to explore the idea of ‘adaptation’, the ideology that defines an architectural type through the process of transformation and negotiation of a community and its direct effect on public space, urban system and architectonic form. These theories will become a kernel for producing a useful and meaningful civic landmark that will strengthen the spirit of people giving hope and new life to the wounded village. The new ‘living monument’, Carpatho-Rusyn Art Gallery and Reconciliation Centre, presents a new gateway for Ruski Kerestur and its people into the healthy future shedding light on their moral values which were tamed for centuries by wars, ethnic cleansing and inexorable conviction of their non existence. The design proposal reintroduces a Rusyn way to the world and echoes the emotion of pride which permeates every Rusyn soul.