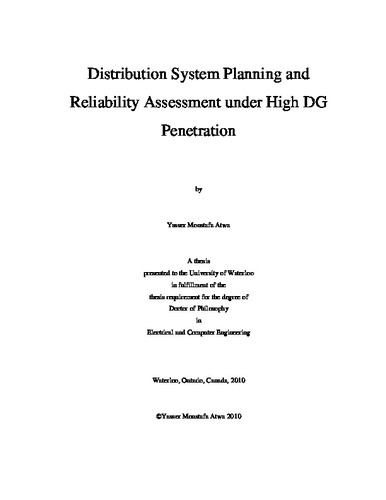 With power system restructuring, continuous growth of demand, and deregulation, small, scattered generators referred to as Distributed Generation (DG) are predicted to play a key role in the power distribution system. Moreover, among the different types of DG units, it is widely accepted that renewable DG units are the key to a sustainable energy supply infrastructure, since they are both inexhaustible and non-polluting. However the intermittent nature and the uncertainties associated with the renewable resources create special technical and economical challenges that have to be comprehensively investigated in order to facilitate the deployment of these DG units in the distribution system. The objective of the work proposed in this thesis is to tackle some of the challenges associated with the increased penetration of renewable DG units into existing distribution systems. This includes the study of the impact of different renewable DG units on the supply adequacy of the distribution system, and the development of planning technique that optimally allocate renewable DG units into the distribution system. Furthermore, a methodology is proposed to check the feasibility of implementing energy storage system (ESS) into the distribution system to mitigate the problems associated with the high penetration of renewable DG units. These problems include the maximum reverse power flow limit, the equipment rating limit, and the voltage limit on each bus. The first step toward the accomplishment of this work is to model the random behaviour of the renewable resources (i.e. wind speed and solar irradiance). Here, different approaches are proposed to model the random behaviour of both wind speed and solar irradiance, either chronologically or probabilistically. Among those approaches are a novel technique of annual wind speed estimation based on a constrained Grey predictor, and a new implementation of the probability density function (pdf) of the clearness index so as to model solar irradiance using Monte Carlo Simulation (MCS). Supply adequacy of distribution systems is assessed based on well-being criteria during different modes of operation (i.e. grid-connected mode and islanding mode), using analytical and (MCS) techniques. During the grid-connected mode, from the load perspective, the substation transformers act as generating units. Therefore, supply adequacy of distribution systems is assessed by considering that the generating units of the distribution system are the substation transformers and the DG units. During the islanding mode of operation, the island is acting as a small autonomous power system (SAPS) and the most important issue during this mode of operation is to determine the probability of the island to be successful (the DG power output within the island matches the load) or a failure (there is a deficit in power generation). The focus of the model developed to optimally allocate the renewable DG units in existing distribution systems is to minimize annual energy losses and at the same time, avoid any violation of the system constraints under any operating condition. The methodology is based on generating a probabilistic generation-load model that combines all possible operating conditions of the renewable DG units with their probabilities, hence accommodating this model in a deterministic planning problem. The objective function of the planning formulation is to minimize annual energy losses; whereas the constraints include the voltage limits, the feeders’ capacity, the maximum penetration limit, and the discrete size of the available DG units. The objective of the methodology proposed for allocating an ESS into distribution systems with high penetration (greater than 20% of the feeder capacity) of renewable energy is to maximize the benefits for both the DG owner and the utility. This is done by sizing the ESS to accommodate the entire surplus of renewable energy, and then allocating it within the system in order to minimize the annual cost of the electricity.