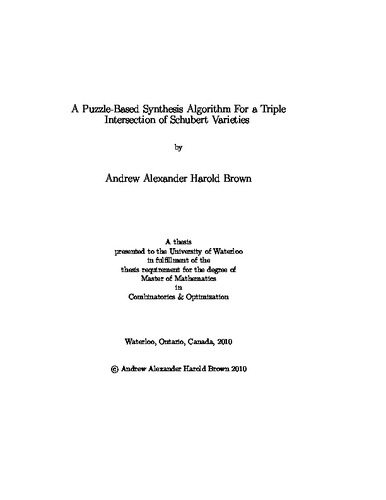 This thesis develops an algorithm for the Schubert calculus of the Grassmanian. Specifically, we state a puzzle-based, synthesis algorithm for a triple intersection of Schubert varieties. Our algorithm is a reformulation of the synthesis algorithm by Bercovici, Collins, Dykema, Li, and Timotin. We replace their combinatorial approach, based on specialized Lebesgue measures, with an approach based on the puzzles of Knutson, Tao and Woodward. The use of puzzles in our algorithm is beneficial for several reasons, foremost among them being the larger body of work exploiting puzzles. To understand the algorithm, we study the necessary Schubert calculus of the Grassmanian to define synthesis. We also discuss the puzzle-based Littlewood-Richardson rule, which connects puzzles to triple intersections of Schubert varieties. We also survey three combinatorial objects related to puzzles in which we include a puzzle-based construction, by King, Tollu, and Toumazet, of the well known Horn inequalities.