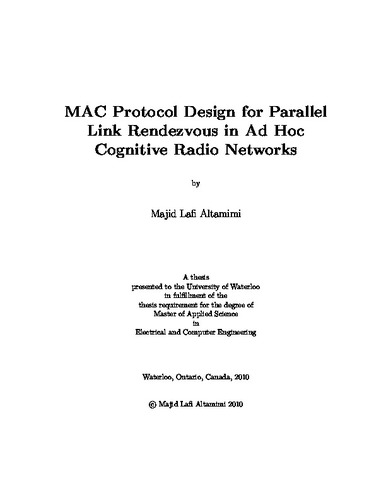 The most significant challenge for next wireless generation is to work opportunistically on the spectrum without a fixed spectrum allocation. Cognitive Radio (CR) is the candidate technology to utilize spectrum white space, which requires the CR to change its operating channel as the white space moves. In a CR ad-hoc network, each node could tune to a different channel; as a result, it cannot communicate with other nodes. This different tuning is due to the difficulty of maintaining Common Control Channel (CCC) in opportunistic spectrum network, and keeping the nodes synchronized in ad-hoc network. The CR ad-hoc network requires a protocol to match tuning channels between ad-hoc nodes, namely, rendezvous channels. In this thesis, two distributed Medium Access Control (MAC) protocols are designed that provide proper rendezvous channel without CCC or synchronization. The Balanced Incomplete Block Design (BIBD) is used in both protocols to provide our protocols a method of rendezvous between CR ad-hoc nodes. In fact, the BIBD guarantees there is at least one common element between any two blocks. If the channels are assigned to the BIBD elements and the searching sequence to the BIBD block, there is a guarantee of a rendezvous at least in one channel for each searching sequence. The first protocol uses a single-BIBD sequence and a multi-channel sensing. Alternatively, the second protocol uses a multi-BIBD sequence and a single-channel sensing. The single-sequence protocol analysis is based on the discrete Markov Chain. At the same time, the sequence structure of the BIBD in a multi-sequence protocol is used to define the Maximum Time to Rendezvous (MTTR). The simulation results confirm that the protocols outperform other existing protocols with respect to Time to Rendezvous (TTR), channel utilization, and network throughput. In addition, both protocols fairly distribute the network load on channels, and share the channels fairly among network nodes. This thesis provides straight forward and efficiently distributed MAC protocols for the CR ad-hoc networks.