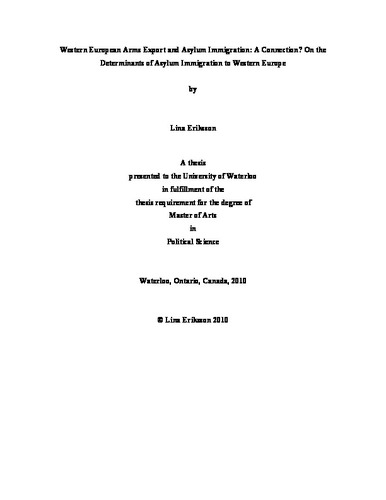 My contribution is focused to a modest framework creation for asylum-immigration theory. By means of arms-export data from 17 Western European countries, tested against inflow of asylum seekers to these countries, covering the past 26 years, it is clear that arms-export from these countries do not contribute to their own asylum-inflow. The main theoretical contribution to existing literature on arms export and migration is therefore that I separate plausible causes of outgoing migration (arms export to countries from where asylum flows are generated) from determinants of asylum immigration. Empirically, I disprove such hypothetical indirect connections put forward both within academic literature and by NGOs like Amnesty International. Instead, I find the counter-intuitive, namely that increased arms export leads to less asylum immigration. Also, in contrast to previous literature on asylum immigration, I build on Granovetter (1973) and propose that diffusion of information through asylum networks depend on weak social connections as opposed to close relationships like ethnic bonds, family ties and friendships. In addition, I problematize the tendency of existing literature to treat asylum seekers as labor migrants and argue for a framework founded on principles which account for the unique circumstances and life situations faced by asylum seekers. In doing so I also extend on previous quantitative works and find that crucial determinants for inflow are signified by the generosity of the welfare state, absence of far right sentiments, and religious diversity. The wealth of a country, its general quality of life, its linguistic and ethnic fractionalization, do not appear to matter.