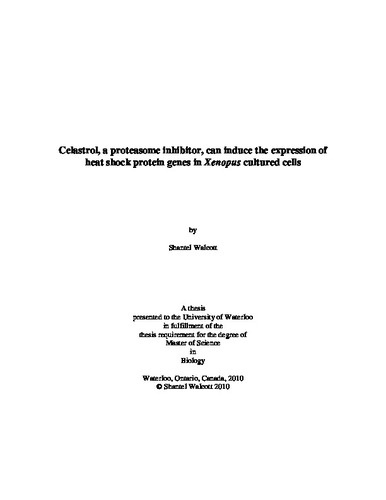 Heat shock proteins (HSPs) are stress-inducible and evolutionarily conserved molecular chaperones that are involved in protein binding and translocation. As molecular chaperones, HSPs bind to denatured proteins, inhibit their aggregation, maintain their solubility, and assist in refolding. This process inhibits the formation of protein aggregates which can be lethal to the cell. In eukaryotic cells, the ubiquitin-proteasome system (UPS) is responsible for the degradation of most non-native proteins. Furthermore, proteasome inhibition has been shown to induce hsp gene expression. Celastrol, a quinone methide triterpene, was shown to have an inhibitory effect on proteasome function in mammalian cells. The present study determined that celastrol induced the accumulation of ubiquitinated proteins and reduced proteasomal chymotrypsin-like activity in Xenopus laevis A6 kidney epithelial cells. In addition, incubation of A6 cells with celastrol induced the accumulation of HSP30 and HSP70 in a dose- and time-dependent manner with maximal levels of HSP accumulation occurring after 18 h of exposure. In A6 cells recovering from celastrol, the relative levels of HSP30 and HSP70 accumulation remained elevated for 18-24 h after removal of celastrol. The activation of heat shock factor 1 (HSF1) DNA-binding may be involved in celastrol-induced hsp gene expression in A6 cells, since the HSF1 inhibitor, KNK437, repressed the accumulation of HSP30 and HSP70. Exposure of A6 cells to simultaneous celastrol and mild heat shock treatment enhanced the accumulation of HSP30 and HSP70 to a greater extent than the sum of both stressors individually. Additionally, concurrent treatment of A6 cells with low concentrations of both celastrol and MG132 produced different patterns of HSP30 and HSP70 accumulation. While combined treatment with celastrol and MG132 acted synergistically on HSP30 accumulation, relative levels of HSP70 were similar to those observed with MG132 alone. Immunocytochemical analysis of celastrol- or MG132-treated A6 cells revealed HSP30 accumulation in a punctate pattern primarily in the cytoplasm with some staining in the nucleus. Also, in some cells treated with celastrol or MG132 large HSP30 staining structures were observed in the cytoplasm. Lastly, exposure of A6 cells to celastrol induced rounder cell morphology, reduced adherence and disorganization of the actin cytoskeleton. In conclusion, this study has shown that celastrol inhibited proteasome activity in amphibian cultured cells and induced HSF1-mediated expression of hsp genes.