From Peptides to Proteins: Exploring Modular Evolution Through the Beta-Trefoil Fold 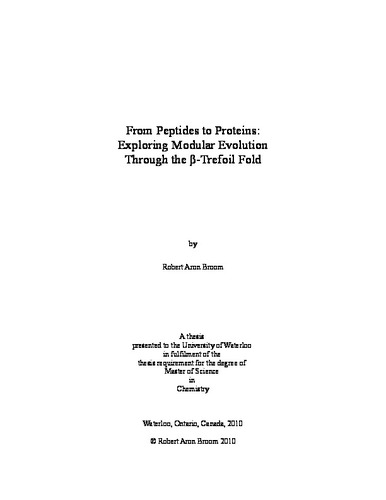 Understanding the origin of protein folds, and the mechanism by which evolution has generated them, is a critically important step on a path towards rational protein design. Modifying existing proteins and designing our own novel folds and functions is a lofty but achievable goal, for which there are many foreseeable rewards. It is believed that modern proteins may have arisen from a primordial set of peptide precursors, which were initially only pseudo-stable or stable only as complexes with RNA, and later were able to self-assemble into multimeric complexes that resembled modern folds. In order to experimentally examine the feasibility of this theory, an attempt was made at reconstructing the evolutionary path of a beta-trefoil. The beta-trefoil is a naturally abundant fold or superfold, possessing pseudo-threefold symmetry, and usually having a sugar-binding function. It has been proposed that such a fold could arise from the triplication of just one small peptide on the order of 40-50 amino acids in length. The evolutionary path of a ricin, a family within the beta-trefoils known to possess a carbohydrate binding function was the chosen template for evolutionary modelling. It was desirable to have a known function associated with this design, such that it would be possible to determine if not only the fold, but also the function, could be reconstructed. A small peptide of 47 amino acids was designed and expressed. This peptide not only trimerized as expected, but possessed the carbohydrate binding function it was predicted to have. In an evolutionary model of the early protein world, the gene for this peptide would undergo duplication and later, triplication, eventually resulting in a completely symmetrical beta-trefoil, which would represent the first modern beta-trefoil fold. Such a completely symmetrical protein was also designed and expressed by triplicating the gene for the aforementioned small peptide. This hypothetical first modern beta-trefoil is: well folded, stable, soluble, and appears to adopt a beta-trefoil fold. Together these results demonstrate that an evolutionary model of early life: that proteins first existed as self-assembling modular peptides, and subsequent to gene duplications or fusions, as what we now recognize as modern folds, is experimentally consistent and not only generates stable structures, but those with function, which of course is a prime requisite of evolution. Moreover the results show that it may be possible to use this modular nature of protein folding to design our own proteins and predict the structure of others.