Romantic Attraction towards Men and Women Consistent with Gender Stereotypes: The Role of System and Personal Control Threat 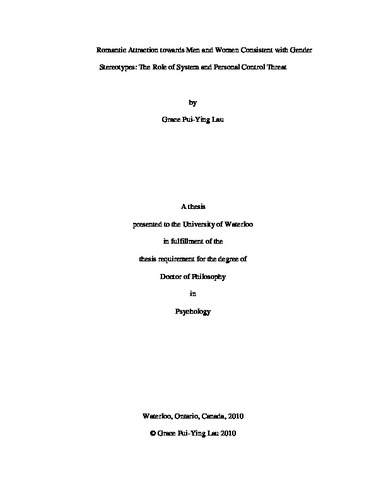 During times of economic and political uncertainty, people often feel a lack of control and security. Three studies demonstrate that the motive for a sense of control can increase the desire for a romantic partner who is likely to provide a sense of control. When the sociopolitical system is threatened, men are more interested in warm, caring, submissive women consistent with ‘benevolent’ sexist ideals of femininity (Study 1). Women, on the other hand, are less interested in men consistent with the masculine stereotype as assertive, independent, and achievement-oriented to the extent that a relationship with these men can diminish their sense of control (Study 2). Threatening beliefs in personal control produced the same effect on women’s romantic interest in stereotypically masculine men, which supports the observed effects of system threat as due to motive for a sense of control. But when women perceive these men as benevolent, external sources of control, they remain interested in these men when threatened (Study 3). Together, the studies suggest that romantic relationships can be a means of establishing a sense of control following economic and political uncertainty.