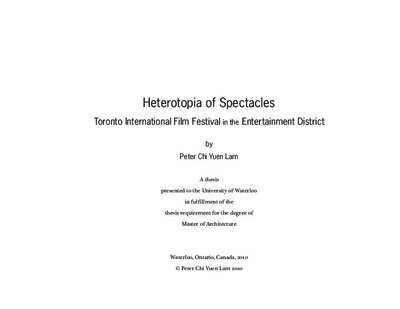 The Toronto International Film Festival Group (tiff.) is the latest addition to an existing array of spectacles offered in Entertainment District of Toronto. Spectacles remove us from reality, surprise us, connect us with others, and allow us to participate as a part of a community. However, their extraordinary nature can be so enticing that they put us into a trance that can leave us vulnerable to political and economic influences. This thesis uses Michel Foucault’s concept of heterotopias, or ‘other places’, to shed light on the values, characteristics and functions of spaces dedicated to these spectacles. These spaces exist in the grey zone between the political-public domain and the economic-private property. They are sanctuaries for events, activities and illusions that deviate from those of the commonplace. The Entertainment District is a heterotopia that reflects and fosters Toronto’s enjoyment and fascination with spectacles. This thesis looks at how the district can further its role as a heterotopia of spectacle by juxtaposing the existing experiences with a variety of contemporary experiences such as free play and film-related events introduced through John Street’s use of the concept of shared space and the introduction of a new home for tiff. Portions of John Street are transformed into continuous ground surfaces that encourage pedestrian circulation within the district, as well as the introduction of new spectacles. The new tiff. building situates itself along this continuous ground surface and extends up to the building’s edge and through laneways to an internal courtyard. The building reads as an incompatible cluster of skewed volumes with their own distinct function stacked on top of one another. The agitated and fragmented geometry of the building is developed through a series of governing lines and curves which sets themselves within the Cartesian grid of the city at irregular angles. These volumes are wrapped in a variety of opaque, transparent and translucent materials that frame views of events on the street, in the neighbourhood, and in the city. This thesis of discourse and design will be of interest to all those wishing to understand heterotopias or ‘other places’ dedicated to spectacles.