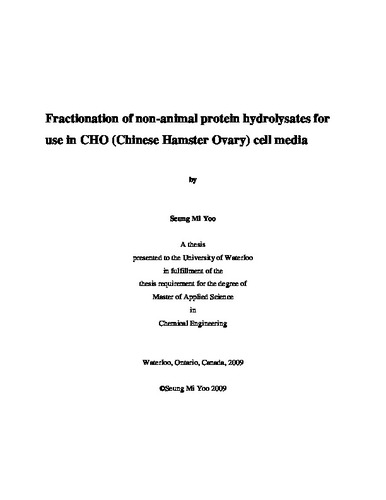 This thesis presents a study on the enhancement of CHO cell growth by Yeast extract, Yeastolate, and Primatone fractions obtained by dead-end ultrafiltration. The total solid, peptide contents, antioxidant capacity and hydrophobicity of the fractions were evaluated. The objective of this project was to evaluate the potential of sequential ultrafiltration as an effective, simple and economical method for the identification of CHO cell growth enhancement components in yeast extract and yeastolate (primatone). The fractionation by sequential ultrafiltration (50 kDa membrane, 3 kDa membrane and 1 kDa membrane) of yeast extract (YE), yeastolate (YET), and primatone (PRI) showed different fouling and fractionation behaviour. Significant fouling was observed with the 50 kDa and 3 kDa membrane while negligible fouling was observed with the 1 kDa membrane. Similar and more significant fouling was observed with the 50 kDa membrane and for YE and PRI in comparison to YET. In contrast, more fouling was observed during the ultrafiltration with the 3kDa MWCO and for YE and YET in comparison to PRI. Finally a relatively constant permeate flux was obtained with the 1 kDa membrane, with PRI the highest and YET the lowest permeate flux. Different total peptide contents were present in the three feeds, 410, 327 and 300 mmol Phe-Gly equivalent/ g total solids for YE, PRI and YET respectively. In spite of different feed equivalent Phe-Gly, all three feeds contained a similar amount of equivalent Phe-Gly with molecular weight larger than 50 kDa, 15-19% of the initial feed stream. This was similar amount to the total solids content. The total peptide content of the retentate obtained for the 3kDa filtration indicated that YE and YET contained ~ 20% of equivalent Phe-Gly larger than 3 kDa but smaller than 50kDa. In contrast, PRI contained only 6% of equivalent Phe-Gly with such molecular weight. The retentate of the 1kDa filtration contained 55% of the feed equivalent Phe-Gly compared to 47% for YE and 38% for YET (p< 0.05). All three feeds have similar total peptide content smaller than 1 kDa. For any given feed, the equivalent Phe-Gly was larger than 1 kDa but smaller than 3 kDa predominated. The total peptide content profile according to size coincides with the total solids distribution for all three feed types. This is the first study that reports on the total peptide content for YE, YET, and PRI subjected to ultrafiltration fractionation. All three feeds and their fractions when freeze-dried had similar antioxidant capacity estimated by the FCR (Folin-Ciocalteu reagent) assay, ~ 40-50 mg Trolox/g sample. The bioactivity of feed and fractions was measured as cell density for CHO (beta-IFN producers) in basal medium supplemented with a combination of the crude non-fractionated feed material and a specific fraction and grown in T25 flasks. PRI showed a similar growth enhancement effect for all fractions when compared to a culture supplemented with the crude non-fractionated. YE showed no growth enhancement for any of the fractions when compared to a culture supplemented with the crude non-fractionated YE. This observation need to be confirmed as a culture supplemented with the crude non-fractionated YE showed a very high growth stimulating effect which was much higher than PRI and YET at the same concentration. Finally, YET 3kDa retentate fraction displayed a 50 % growth enhancement effect. In conclusion, the fractions obtained from the two non-animal protein hydrolysates considered in this study, YE and YET showed limited CHO cell growth enhancement effect when compared to the non-fractionated material. Only the YET 3kDa retentate fraction displayed a good CHO cell growth enhancement effect. YET 3kDa represent an attractive serum substitute for its use in culturing CHO cells. PRI, an animal derived protein hydrolysate showed the best growth enhancement effect for all fractions produced in this study. These results suggest that YET has high potential as a media additive for the development of serum-free media which can promote cell growth and, in the future this work can contribute in production of therapeutic proteins markets.