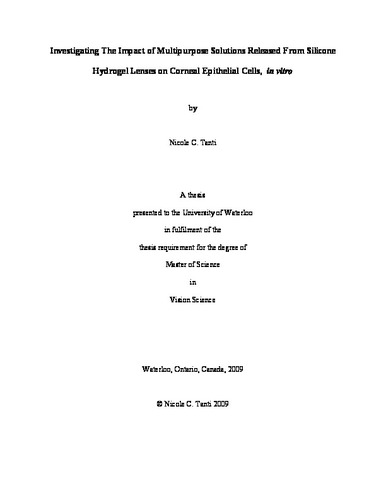 Cytotoxicity of Multi-Purpose Solutions (MPS) is commonly tested on cells using diluted MPS or extracts from MPS soaked contact lenses. There is evidence that lens type will affect uptake and release of compounds contained in MPS. To assess the cytotoxicity of agents contained in MPS that would be released by contact lens, an in vitro “onlay” model was used, whereby MPS soaked silicone hydrogel lenses were directly set onto a confluent monolayer of corneal cells. Chapter 4 describes the impact of MPS released from contact lenses on immortalized human corneal epithelial cells. MPS-soaked lens interactions with cells were characterized by studying cell viability, cell adhesion and caspase assays. In Chapter 5, mechanisms of cell death induced by exposure to MPS from contact lenses were determined through evaluation of apoptotic markers, such as activation of caspase 3 and 9. In Chapter 6, the impact of the physical properties of silicone hydrogel lenses, specifically surface treatments, on cytotoxicity of MPS were investigated. The development of methods for characterizing the release of MPS from lenses, using absorbance spectra, is also described. The results indicate that exposure to contact lenses soaked in Opti-Free Express (OFX) and ReNu not only induces cell death in vitro, but also has an adverse effect on adhesion phenotype, suggesting that the remaining cells may have a compromised epithelial structure. Borate- buffered MPS were found to be more cytotoxic than phosphate-buffered base solutions. Investigation of the mechanisms of cell death revealed that ReNu and OFX induced corneal epithelial cell death in vitro using different pathways, whereby ReNu induced a necrotic pathway while OFX-induced cell death was mediated by the intrinsic pathway of apoptosis. The in vitro model was also able to identify differences between silicone hydrogels with different surface treatments: the different surface treatments and chemistries of silicone hydrogels lens will affect the release profile of MPS and hence their potential cytotoxicity. By investigating the induction of cell death processes by solution-lens combinations in vitro, we aim to prevent potential adverse effects in the cornea, which may ultimately compromise various visual and barrier functions. The findings indicate the wealth of information in vitro cytotoxicity testing can provide when evaluating the toxicological profile of MPS.