The diversity and composition of benthic macroinvertebrate assemblages in streams in the Mackenzie River system, Northwest Territories 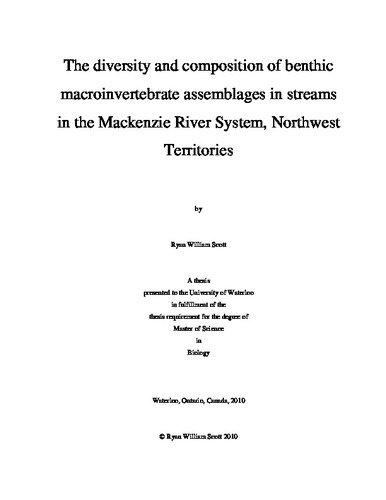 Impending natural resources development and concern about the effects of climate change have spurred increased efforts to study and monitor aquatic habitats in the Mackenzie River system. As part of Environment Canada’s attempt to survey the system in advance of the construction of the Mackenzie Gas Pipeline, benthic macroinvertebrates were sampled at 50 streams spanning the geographical range of the Mackenzie system in the Northwest Territories, Canada, to assess spatial patterns in diversity and assemblage structure and the environmental factors driving them. Replicated, quantitative D-net samples were collected during the late summer of 2005 through 2008, mostly at crossings of the proposed pipeline route. 373 macroinvertebrate taxa were recorded, mainly aquatic insects, which were identified to the genus or species levels; other groups were identified to higher taxonomic levels. Ephemeroptera and Plecoptera diversity declined along a latitudinal gradient, while Trichoptera diversity declined in the middle of the latitudinal range and rose towards the far north. Chironomidae (Diptera) increased in diversity and abundance towards the far north, becoming dominant in the northern sub-arctic forest and lowland tundra of the Mackenzie Delta. Diversity, measured as the average generic richness per stream, correlated with a composite environmental variable representing stream size, but not much else; spatial trends in local generic richness were only apparent in the far north of the study area. Regional diversity was assessed using rarefaction curves and showed a clear decrease from south to north across the study area for most taxa; the major exception was the chironomid subfamilies Orthocladiinae and Chironomini, the former being diverse throughout the study area and the latter increasing in diversity on the tundra. Odonata, Hemiptera and Coleoptera were well-represented in the south of the study area, but decreased sharply in diversity and abundance in the north; another common order, Megaloptera, was entirely absent from the study area, as were crayfish. Community composition varied along a latitudinal gradient, with some species restricted to northern latitudes and many more species restricted to the southern areas. Composition varied by region, as did the environmental factors that control it. Streams in the north of the system are connected to hundreds of small lakes and tend to freeze in the winter, which increases habitat stability; assemblages in this region were characterized by relatively large chironomids that are usually associated with lentic habitats and by a lack of taxa that are intolerant to freezing. Substrate was the main factor explaining differences in assemblage composition in this region. Just to the south, alluvial streams are more common and permafrost is continuous with very shallow active layers, iv which likely results in intense discharge peaks and ice scour in the spring and flashy summer hydrographs. Invertebrates in this region were mainly short-lived, small sized orthoclads, baetids and chloroperlids; the annual disturbance regime seems likely to be an important factor shaping community composition in this region. Many streams in this region received input from saline springs, resulting in perennial flow, and these streams harboured several taxa that were absent or rare in other streams at similar latitudes, including several stoneflies (e.g. Pteronarcys, Sweltsa); the presence of flow during the winter was found to be a major factor affecting community composition in this region, which surrounded the town of Norman Wells, NT. Nutrient dynamics appeared to be important in structuring benthic assemblages in the southern portion of the study region, with highnutrient streams supporting a diverse fauna which included many taxa that were absent in the north, while communities in low-nutrient streams were more similar to the northern alluvial stream fauna. There was no spatial distinction between low- and high-nutrient streams in the southern region, and the difference may be due to the local conditions of permafrost, which is patchy and discontinuous in the region. Evidence that winter ice and permafrost conditions are important drivers of benthic invertebrate diversity and community composition in the Mackenzie system, along with the latitudinal gradients which are consistent with a temperature/climate gradient, raises the possibility that benthic assemblages may be useful as indicators of effects of global climate change on freshwater habitats in the Canadian north. More immediately, construction of the Mackenzie Gas Pipeline may affect stream habitat due to sedimentation, and plans for the operation of the pipeline have raised concerns about potential effects on permafrost conditions. Implications for development of a biomonitoring program utilizing benthic invertebrates and their potential as indicators of climate change are discussed.