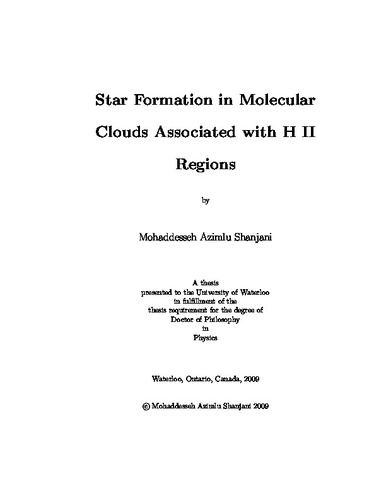 We have studied the properties of molecular clouds and the stellar population associated with 10 H II regions. We used the James Clerk Maxwell Telescope (JCMT) to make 12CO(2-1) maps in order to study the structure of the cloud and to identify the dense clumps within the cloud. In half of our sources we found that molecular gas appears to have been pushed and compressed into the shells around the expanding ionized gas and fragmented into clumps. Most of these clumps have higher temperature and density compared to the other clumps within the mapped regions. We made pointed observations in 13CO(2-1) and CS(5-4) at the peak of 12CO(2-1) within each clump to measure and calculate the physical properties of the clumps such as line width, excitation temperature, density and mass. Two gas components were selected in the cloud associated with S175 to investigate the influence of the H II region on the molecular gas: S175A is adjacent to the ionization fronts and probably affected by the expanding H II region while S175B is too distant to be affected. Contrary to our expectation S175B was a turbulent region with broadened line profiles. We made a sub-map in 12CO(3-2) using HARP at the JCMT to search for the source of turbulence and identified a proto-stellar outflow in S175B. We examined the relationship between gas parameters derived for the clumps within the entire sample. The identified clumps were found to be divided into two categories: “type I” sources in which we can find a relationship between size and line width and “type II” sources where there is no relation. We found that the power law indices for type I sources are generally larger than the previous studies. Larger line widths and consequently larger indices seems to be an initial environmental characteristic of massive star forming regions We found that mass and column density increase with line width for both type I and type II sources. We did not find any relation between the size and column density. The influence of the H II region on temperature and line widths was examined and we found that the temperature decreases with distance from the ionized fronts but no change was found for the line width. Although most of the clumps within the compressed shells around the H II region have generally larger line widths, from this test we may conclude that the internal dynamics of the cloud beyond the compressed shells is not much influenced by the expanding H II region. Finally, our near IR study of the stellar populations using 2MASS data, shows that in half of the regions the exciting star belongs to a cluster. We also found that star formation is consistent with triggering by the expansion of the ionized gas in some of sources in our sample. At least two young embedded clusters have been identified at the same position as the dense clumps within fragmented shells around H II regions. These clumps have high temperature and density and large line widths. We identify some other hot and dense clumps very similar in molecular gas properties as candidates of cluster or massive star formation. Most of the active star forming regions associated with H II regions have a population of massive newborn stars compared to a star forming cloud which is distant from the massive star and the ionized gas. We conclude that more massive stars form in the molecular cloud at the peripheries of H II regions but it is not clear f this is a result of the initial conditions that have formed the massive, exciting star of the H II region or a feedback of the massive star itself and the expanding H II region.