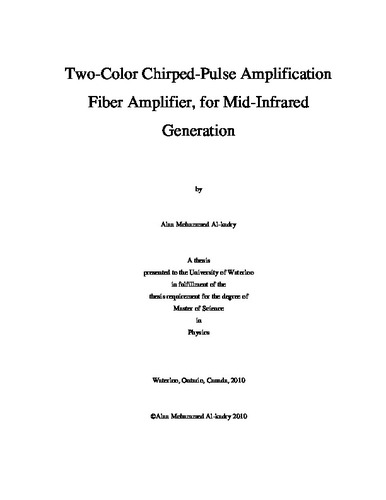 The goal of this thesis is developing a two-color Ytterbium (Yb) fiber amplifier system that can be used for generation of mid-infrared radiation. Previously, our group reported generating 20 µW of average power, at a wavelength of 18µm. This was accomplished through the amplification of a two color-seed with peaks at 1040nm and 1110nm, through a two stage amplification without any compression. The mid-infrared radiation (MIR) was generated with a 4.5 ps pulse duration by the method of difference-frequency mixing, using 300 mW of average power from the two-color Yb-fiber amplifier. Because there was no limitation by two-photon absorption, MIR output power could be scaled by increasing the amplifier power. The current project aims to increase the peak power of the laser pulses to improve the efficiency of the nonlinear mixing. The two-colour seed is generated by continuum generation in a photonic crystal fibre, pumped by 200 mW of average power from a mode-locked Yb:fibre laser. In order to efficiently increase the energy of the two wavelengths, the 4.6 mW seed pulse is now pre-amplified up to 21 mW in a 2.7 m length single mode, single core Yb:fibre . The pre-amplifier used a double-ended pumping scheme with two single mode diode lasers at 976 nm each having 150 mW maximum pump power. A notch filter was placed in the output beam to eliminate any Amplified Spontaneous Emission. After further amplification in a 7 m length of double clad, Yb-fibre, a maximum average power of 727 mW was achieved for two colours peaked at 1035 nm and 1105 nm wavelengths. The pump power for this stage was 6 W. A grating stretcher is now used to select the two-colour input along with stretching the pulses. A three grating compressor is used to compress the output pulses to 466 fs pulse duration. After compression the average power of the two colours is 350 and 110 mW for wavelengths at 1035 and 1105nm, respectively. These higher power pulses are planned to be used to increase the mid-infrared generation efficiency.