Statistical Analysis of Hartmann-Shack Images of a Pre-school Population 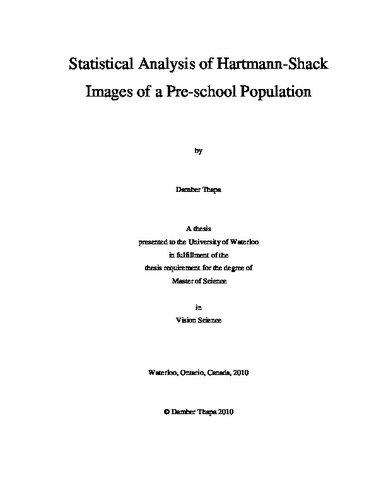 The impact of uncoordinated growth of the optical components of the eye may stimulate different levels of monochromatic aberrations in the growing eyes of the children. This thesis aimed to examine the impact of age, visual acuity and refractive error on higher order aberrations as well as to determine the relationship between them. Hartman Shack images taken with the Welch Allyn® SureSight Autorefractor were calibrated in order to determine the Zernike coefficients up to the 8th order for a pupil diameter of 5mm. The MATLAB code proposed by Thibos et al that follows the standard for reporting the optical aberrations of the eye was the basis of code written for this study. Modification was required to suit the specific needs of the Welch Allyn® SureSight Autorefractor. After calibration the lower order aberrations could then be compared with the results from cyclopledged retinoscopy. RMS values of aberrations and Strehl ratios were computed to examine the optical performance of the eye. A total of 834 Hartmann-Shack images of 436 children (mean age 3.94± 0.94 years, range 3 to 6 years) were examined in this study (right eyes 436; left eyes 398).The sample had a mean (± STD) spherical equivalent of 1.19 ± 0.59D, a mean with-the-rule astigmatism (J0) of 0.055 ± 0.22D, and a mean oblique astigmatism (J45) of 0.01±0.14D. Visual acuity varied from 6/6 to 6/18. Moderate mirror symmetry was found between the eyes. Like refractive error, higher order aberrations declined with age in this sample. There was an impact of higher order aberrations on refractive error. Significantly higher ocular aberrations were found in the higher hyperopic group (SE>+2.0D) compared to emmetropic (-0.5<SE<+0.5D) and low hyperopic groups (+0.5<SE<+2.0D). The Strehl ratio was significantly lower in the high hyperopic group. Higher Strehl ratios were observed for better acuity groups but the average Strehl ratios among the different visual acuity groups were not statistically significant. In conclusion, there was an impact of age on the ocular aberrations. A wider range of age from birth to adolescence is required for further investigation. This could be indirectly influenced by the age related changes in refractive error as the correlation between refractive error and the higher order aberrations were significant. This finding also concludes that Strehl Ratio alone is not capable of perfectly describing the visual acuity of the eye; other metrics such as the neural transfer function and neural noise are necessary to describe the resultant visual performance of the eye.