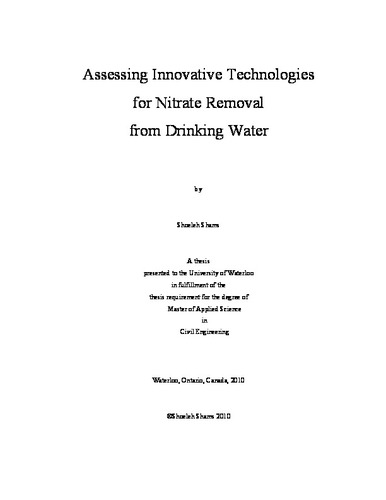 Several health problems may be caused by excess nitrate in drinking water, the most important of which being methemoglobinemia, a potentially fatal disorder, in infants under six months of age. Many different parts of the world have been facing the problem of nitrate contaminated surface and groundwaters due in large part to excessive use of nitrate-based chemical fertilizers. In the Region of Waterloo, Ontario, Canada some groundwater sources have nitrate concentrations approaching the Health Canada and Ontario Ministry of the Environment maximum acceptable concentration (MAC) of 10 mg NO3--N/L. Finding a practical and economical way to reduce nitrate concentrations in representative groundwater in the Region of Waterloo was the overall objective of this research. To achieve this goal, nitrate removal technologies including biological denitrification, ion exchange (IX), reverse osmosis (RO), electrodialysis (ED), and chemical denitrification were reviewed and compared. IX and RO were found to be the most promising technologies for nitrate removal. They have also been approved by the United States Environmental Protection Agency (USEPA) as Best Available Technologies (BAT). To investigate the feasibility of IX and RO for nitrate removal from representative groundwater in the Region of Waterloo, bench-scale experiments were conducted and compared. These technologies could be considered for application at full- or point-of-use (POU)-scale. Decision support assistance for the selection of the appropriate technology for different technical and economical conditions is provided as an outcome of this work. Two nitrate-selective ion exchange resins (Dowex™ NSR-1 and Purolite® A-520E), two non-selective resins (Purolite® A-300E and Amberlite® IRA400 Cl), and a commercially-available RO POU device (Culligan® Aqua-Cleer® model RO30), which included a particle filter and a carbon block, were tested with deionized water and real groundwater.* IX results confirmed that production time before resin exhaustion was influenced by operating conditions, specifically bed depth as would be expected. It was also confirmed that the presence of competing anions (sulfate, chloride) and alkalinity adversely affected performance, with sulfate being the main competitor for nitrate removal. The extent of these effects was quantified for the conditions tested. At the end of the runs, the non-selective resins were prone to potential nitrate displacement and release into product water and are therefore not recommended. The nitrate-selective resins did not release previously adsorbed nitrate as their capacity became exhausted. Purolite® A-520E was identified as the best alternative amongst the four resins for removing nitrate from the representative groundwater source. The RO unit removed roughly 80% of the nitrate from groundwater. Background ions didn’t appear to compete with each other for removal by RO units, so RO might be a more appropriate technology than IX for nitrate removal from waters with high concentrations of sulfate or TDS. Since RO removes other background ions as well as nitrate, the product water of RO is low in alkalinity and can potentially be corrosive, if water from a small full-scale system is pumped through a communal distribution system. Post-treatment including pH adjustment, addition of caustic soda, and/or corrosion inhibitors may be required. While the carbon block did not play a substantial role with respect to removal of nitrate in the groundwater tested, a potential issue was identified when running RO systems without the carbon block. In deionized water (and presumably in very low alkalinity real waters) it was noted that RO nitrate removal efficiency dropped substantially as the alkalinity of the influent water approached zero. With respect to the scale of application of IX and RO devices, IX can be applied at full-scale without requiring large amounts of space. However, if feed water contains high concentrations of sulfate or TDS, nitrate leakage happens sooner and regeneration would be needed at more frequent intervals. Also, chloride concentrations in IX product water might exceed aesthetic objectives (AO) and should be monitored in cases of high feed water TDS. POU IX devices are not recommended when feed water nitrate concentration is high due to potential nitrate leakage into the product water when the resin is nearing exhaustion which increases public health risk. Issues associated with RO application at full-scale are high energy demand, low recovery, high costs, need of pre-treatment (fouling control), and post-treatment (corrosion control). On the other hand, POU RO devices may be acceptable since low recovery is of less importance in a household system, and product water corrosivity is less relevant. POU RO devices are preferable to POU IX units due to their lower risk of nitrate leakage into treated water. * Mention of trade names or commercial products does not constitute endorsement or recommendation for use.