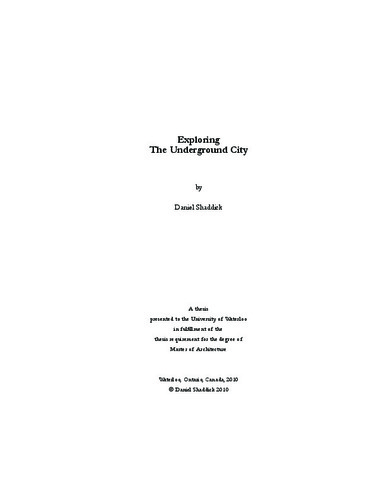 The inception of Montreal’s underground displayed significant inventiveness in striving for a multi-level city, however today the urban network has developed into an overly-commercialized, perfunctory series of ‘unfelt’ commuting spaces. This thesis is firstly an invitation to see past the glossy storefronts and re-connect to the romantic notion of a subterranean urban labyrinth. Situated between the Expo islands and Mount Royal, the underground city needs an infusion of places of active engagement in order to exist in the city’s social imaginary. This thesis also emphasizes the sense in which these dormant spaces can be awoken to provoke in its occupants a sense of their potential for play and encounter. Transgression puts this potential in motion. The notion of transgression forwarded is personified by the 21st century ‘urbanist’, who studies and uses the city. As flâneur, drifter, urban explorer, traceur, tracker, the transgressive urbanist transforms familiarity by crossing thresholds. Beyond these thresholds lies new territory of sensual engagement and physicality, where we playfully search for the city’s secrets, and engage our capacities to ‘feel’ space. By investigating these practices, a design direction emerges that offers relief from the persistence of ‘anesthetic space’ in Montreal’s underground. This thesis presents reflections on the history of Montreal, a poetic exploration of ‘urban ambiances’, and a curation of works by transgressive urbanists. Through a series of cartographic explorations charting the network’s accidents and deviations, a series of zones are identified as potential intervention sites. Within these places are converging traces of subterranean tunnels, freeways and passages. The intention of these interventions is to unearth a latent urban ambiance of play.