Spiking the Line: A Megaregional Growth Plan for the Windsor/Quebec Corridor 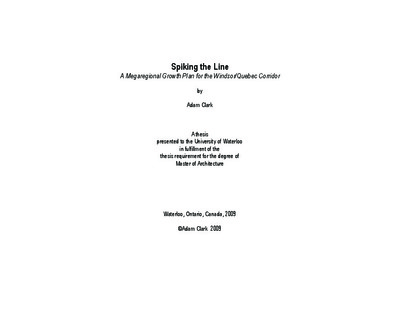 In a truly global context, the contemporary urban landscape is changing dramatically. The megaregion has emerged as the primary scale of economic development and the home of the world’s wealth, innovation and progress. Increasingly expensive and scarce land, as well as the protection and preservation of farmlands and habitats, are driving up density. A renewed emphasis on environmental sustainability means not just greener building treatments and improved fuel efficiencies, but a need to redirect infrastructural investments in far more efficient ways. If, as the Regional Plan Association asserts, megaregions have replaced metropolitan regions and cities as the geographic units of the global economy, they must be planned, structured and supplied to maximize their potential as such. This thesis proposes a regional plan for the Windsor/Quebec corridor that attempts to satisfy any qualitative aspirations of the current “Places to Grow” plan for the Greater Golden Horseshoe while strategically repositioning growth in the region to be more globally competitive and sustainable. This proposal utilizes two very specific existing elements in expanded roles; the 400 series highways as an infrastructural distribution network, and the regional shopping mall as a strategic site for discreet, distributed urban cores. Together, these two elements form a conceptual city at the megaregional scale; a concentrated, sprawl-free, efficient and sustainable form of city-making that also integrates seamlessly into the existing urban morphology.