On Techno-economic Evaluation of Wind-based DG 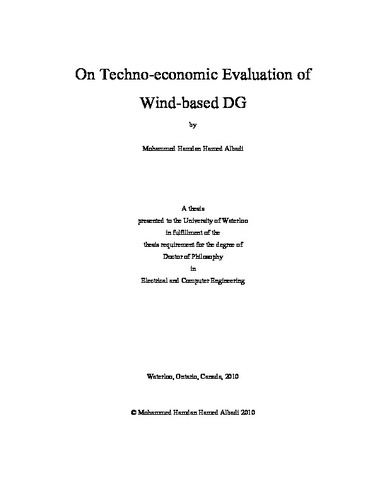 The growing interest in small-scale electricity generation located near customers, known as Distributed Generation (DG), is driven primarily by emerging technologies, environmental regulations and concerns, electricity market restructuring, and growing customer demand for increased quality and reliability of the electricity supply. Wind turbines are one of the renewable DG technologies that have become an important source of electricity in many parts of the world. Wind power can be used in many places to provide a viable solution to rising demand, energy security and independence, and climate change mitigation. This research aims broadly at facilitating the integration of wind-based DG without jeopardizing the system’s economics and reliability. To achieve this goal, the thesis tackles wind power from three perspectives: those of the policy maker, the investor, and the system operator. Generally, the economic viability of a project is determined within the framework of relevant policies. Therefore, these policies influence the decisions of potential investors in wind power. From this perspective, chapters 3 and 4 investigate the influence of policies on the economic viability of wind-based DG projects. In chapter 3, the role of Ontario’s taxation and incentive policies in the economic viability of wind-based DG projects is investigated. In this study, the effects of provincial income taxes, capital cost allowances, property taxes, and relevant federal incentives are considered. Net Present Value (NPV) and Internal Rate of Return (IRR) for different scenarios are used to assess the project’s viability under the Ontario Standard Offer Program (SOP) for wind power. In chapter 4, the thesis proposes the use of wind power as a source of electricity in a new city being developed in the Duqm area of Oman, where no policies supporting renewable energy exist. The study shows that the cost of electricity produced by wind turbines is higher than that of the existing generation system, due to the subsidized prices of domestically available natural gas. However, given high international natural gas prices, the country’s long-term Liquefied Natural Gas (LNG) export obligations, and the expansion of natural gas-based industries, investments in wind power in Duqm can be justified. A feed-in tariff and capital cost allowance policies are recommended to facilitate investments in this sector. From a wind-based DG investor’s perspective, the optimal selection of wind turbines can make wind power more economical, as illustrated in chapters 5 and 6. In chapter 5, the thesis presents a new generic model for Capacity Factor (CF) estimation using wind speed characteristics at any site and the power performance curve parameters of any pitch-regulated wind turbine. Compared to the existing model, the proposed formulation is simpler and results in more accurate CF estimation. CF models can be used by wind-based DG investors for optimal turbine-site matching applications. However, in chapter 6, the thesis demonstrates that using CF models as the sole basis for turbine-site matching applications tends to produce results that are biased towards higher towers but do not include the associated costs. Therefore, a novel formulation for the turbine-site matching problem, based on a modified CF formulation that does include turbine tower height, is introduced in chapter 6. The proposed universal Turbine-Site Matching Index (TSMI) also includes the effects of turbine rated power and tower height on the initial capital cost of wind turbines. Chapter 7 tackles wind power from a power system operator’s perspective. Despite wind power benefits, the effects of its intermittent nature on power systems need to be carefully examined as penetration levels increase. In this chapter, the thesis investigates the effects of different temporal wind profiles on the scheduling costs of thermal generation units. Two profiles are considered: synoptic-dominated and diurnal-dominated variations of aggregated wind power. To simulate wind profile impacts, a linear mixed-integer unit commitment problem is formulated in a GAMS environment. The uncertainty associated with wind power is represented using a chance constrained formulation. The simulation results illustrate the significant impacts of different wind profiles on fuel saving benefits, startup costs, and wind power curtailments. In addition, the results demonstrate the importance of the wide geographical dispersion of wind power production facilities to minimize the impacts of network constraints on the value of the harvested wind energy and the amount of curtailed energy.