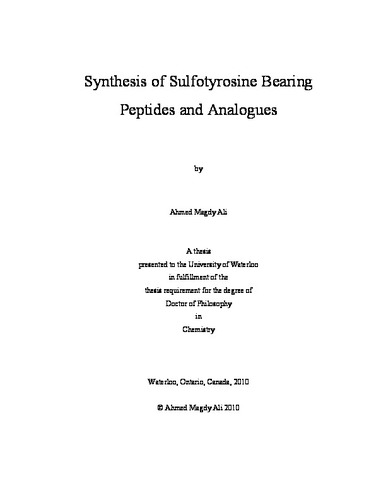 Sulfation of tyrosine residues is a post-translational modification that occurs on many secretory as well as transmembrane proteins. This modification is believed to be essential for numerous biological processes. However, one of the factors hindering the study of the significance of sulfotyrosine (sTyr) within a protein is the absence of a general method that enables the synthesis of sTyr peptides in satisfactory yields and purity. A general approach to the synthesis of sTyr-bearing peptides was developed in which the sTyr residue is incorporated into the peptides with the sulfate group protected. For the implementation of this general approach a new protecting group for sulfates, namely, the dichlorovinyl (DCV) group was developed. This was accomplished by conducting a careful analysis of the reaction of a trichloroethyl (TCE)-protected sulfate ester with piperidine and 2-methylpiperidine (2-MP). A unique sulfuryl imidazolium reagent, compound 2.22, was also developed that enabled the ready synthesis of DCV-protected sulfates. This reagent was used to prepare the amino acid building block FmocTyr(SO3DCV)OH (2.23). An alternative and more economical synthesis of FmocTyr(SO3DCV)OH (2.23) was also developed that did not require reagent 2.22. Fmoc-based solid phase peptide synthesis (SPPS) was used to incorporate 2.23 into peptides using 2-MP for Fmoc removal. After cleavage of the peptide from the support, the DCV group was removed by hydrogenolysis to give sTyr peptides in good yield and purity. Using this approach a variety of sTyr peptides were prepared including a tetrasulfated 20-mer corresponding to residues 14-33 in chemokine receptor D6 and a disulfated 35-mer corresponding to residues 8-42 of the N-terminus region of the chemokine receptor DARC and this is the largest multisulfated sTyr–bearing peptide made to date. It was also demonstrated that the incorporation of an important non-hydrolyzable sTyr analog, 4-(sulfonomethyl)phenylalanine (Smp), into peptides can be accomplished in good yield by protecting the sulfonate residue with a TCE group during SPPS. This approach was shown to be superior to the previously reported method where the sulfonate group is unprotected. Finally, a number of sulfotyrosine bearing peptides were synthesized and tested as protein tyrosine phosphatase-1B (PTP1B) inhibitors