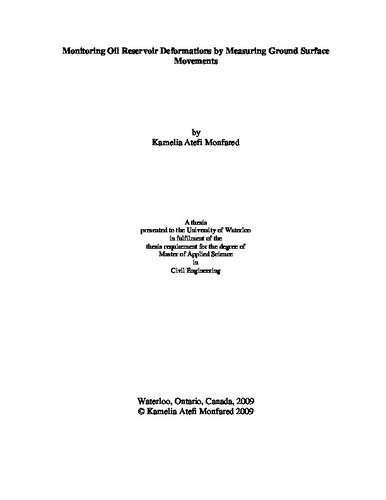 It has long been known that any activity that results in changes in subsurface pressure, such as hydrocarbon production or waste or water reinjection, also causes underground deformations and movement, which can be described in terms of volumetric changes. Such deformations induce surface movement, which has a significant environmental impact. Induced surface deformations are measurable as vertical displacements; horizontal displacements; and tilts, which are the gradient of the surface deformation. The initial component of this study is a numerical model developed in C++ to predict and calculate surface deformations based on assumed subsurface volumetric changes occurring in a reservoir. The model is based on the unidirectional expansion technique using equations from Okada’s theory of dislocations (Okada, 1985). A second numerical model calculates subsurface volumetric changes based on surface deformation measurements, commonly referred to as solving for the inverse case. The inverse case is an ill-posed problem because the input is comprised of measured values that contain error. A regularization technique was therefore developed to help solve the ill-posed problem. A variety of surface deformation data sets were analyzed in order to determine the surface deformation input data that would produce the best solution and the optimum reconstruction of the initial subsurface volumetric changes. Tilt measurements, although very small, were found to be much better input than vertical displacement data for finding the inverse solution. Even in an ideal case with 0 % error, tilts result in a smaller RMSE (about 12 % smaller in the case studied) and thus a better resolution. In realistic cases with error, adding only 0.55 % of the maximum random error in the surface displacement data affects the back-calculated results to a significant extent: the RMSE increased by more than 13 times in the case studied. However, in an identical case using tilt measurements as input, adding 20 % of the maximum surface tilt value as random error increased the RMSE by 7 times, and remodelling the initial distribution of the volumetric changes in the subsurface was still possible. The required area of observation can also be reduced if tilt measurements are used. The optimal input includes tilt measurements in both directions: dz/dx and dz/dy. iv With respect to the number of observation points chosen, when tilts are used with an error of 0 %, very good resolution is obtainable using only 0.4 % of the unknowns as the number of benchmarks. For example, using only 10 observation points for a reservoir with 2500 elements, or unknowns resulted in an acceptable reconstruction. With respect to the sensitivity of the inverse solution to the depth of the reservoir and to the geometry of the observation grid, the deeper the reservoir, the more ill-posed the problem. The geometry of the benchmarks also has a significant effect on the solution of the inverse problem.