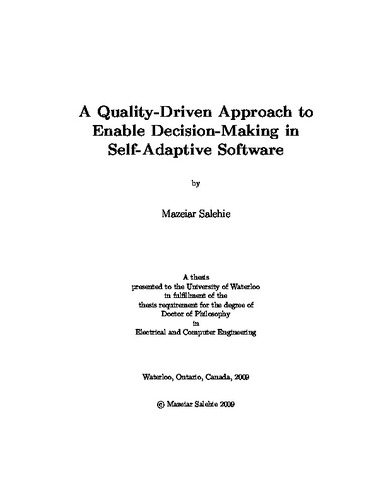 Self-adaptive software systems are increasingly in demand. The driving forces are changes in the software “self” and “context”, particularly in distributed and pervasive applications. These systems provide self-* properties in order to keep requirements satisfied in different situations. Engineering self-adaptive software normally involves building the adaptable software and the adaptation manager. This PhD thesis focuses on the latter, especially on the design and implementation of the deciding process in an adaptation manager. For this purpose, a Quality-driven Framework for Engineering an Adaptation Manager (QFeam) is proposed, in which quality requirements play a key role as adaptation goals. Two major phases of QFeam are building the runtime adaptation model and designing the adaptation mechanism. The modeling phase investigates eliciting and specifying key entities of the adaptation problem space including goals, attributes, and actions. Three composition patterns are discussed to link these entities to build the adaptation model, namely: goal-centric, attribute-action-coupling, and hybrid patterns. In the second phase, the adaptation mechanism is designed according to the adopted pattern in the model. Therefore, three categories of mechanisms are discussed, in which the novel goal-ensemble mechanism is introduced. A concrete model and mechanism, the Goal-Attribute-Action Model (GAAM), is proposed based on the goal-centric pattern and the goal-ensemble mechanism. GAAM is implemented based on the StarMX framework for Java-based systems. Several considerations are taken into account in QFeam: i) the separation of adaptation knowledge from application knowledge, ii) highlighting the role of adaptation goals, and iii) modularity and reusability. Among these, emphasizing goals is the tenet of QFeam, especially in order to address the challenge of addressing several self- * properties in the adaptation manager. Furthermore, QFeam aims at embedding a model in the adaptation manager, particularly in the goal-centric and hybrid patterns. The proposed framework focuses on mission-critical systems including enterprise and service-oriented applications. Several empirical studies were conducted to put QFeam into practice, and also evaluate GAAM in comparison with other adaptation models and mechanisms. Three case studies were selected for this purpose: the TPC-W bookstore application, a news application, and the CC2 VoIP call controller. Several research questions were set for each case study, and findings indicate that the goal-ensemble mechanism and GAAM can outperform or work as well as a common rule-based approach. The notable difference is that the effort of building an adaptation manager based on a goal-centric pattern is less than building it using an attribute-action-coupling pattern. Moreover, representing goals explicitly leads to better scalability and understandability of the adaptation manager. Overall, the experience of working on these three systems show that QFeam improves the design and development process of the adaptation manager, particularly by highlighting the role of adaptation goals.