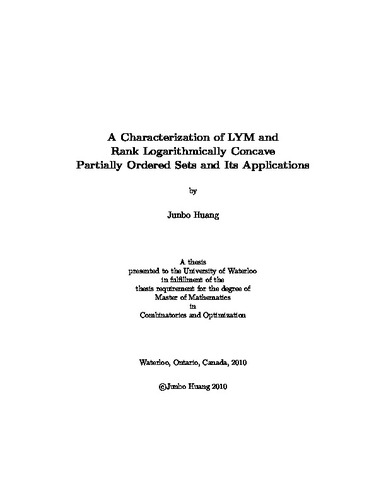 The LYM property of a finite standard graded poset is one of the central notions in Sperner theory. It is known that the product of two finite standard graded posets satisfying the LYM properties may not have the LYM property again. In 1974, Harper proved that if two finite standard graded posets satisfying the LYM properties also satisfy rank logarithmic concavities, then their product also satisfies these two properties. However, Harper's proof is rather non-intuitive. Giving a natural proof of Harper's theorem is one of the goals of this thesis. The main new result of this thesis is a characterization of rank-finite standard graded LYM posets that satisfy rank logarithmic concavities. With this characterization theorem, we are able to give a new, natural proof of Harper's theorem. In fact, we prove a strengthened version of Harper's theorem by weakening the finiteness condition to the rank-finiteness condition. We present some interesting applications of the main characterization theorem. We also give a brief history of Sperner theory, and summarize all the ingredients we need for the main theorem and its applications, including a new equivalent condition for the LYM property that is a key for proving our main theorem.