Walking City: The transformative role of pedestrians in public space 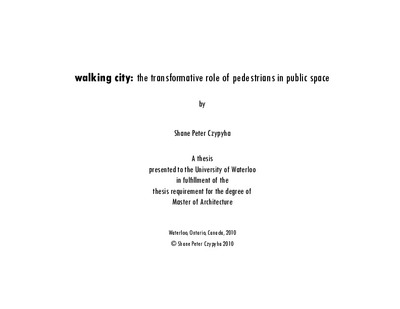 Vancouver’s downtown peninsula symbolically describes the sense of place unique to the city as a whole. It is a livable city with a strong connection to its natural surroundings, witnessed in its very active population. This sense of place, however, has far more to do with its relationships to its natural setting, the mountains and ocean, than its urban spaces or architecture. Most of the central public spaces are quite ordinary. Although the temperate climate is ideal for inhabiting streets and squares, the majority of the city’s prominent public spaces exist along the water’s edge. Ultimately locals and visitors gravitate to the periphery and the nearby wilderness, conditioning them to look outward on the natural setting as opposed to reflecting inward on the city. Vancouver’s iconic identity exists primarily on the panoramic level. Great cities throughout the world exist without the splendour of mountains and ocean and Vancouver must stop relying on these to constitute its important public spaces. This thesis makes a proposal for a series of large scale urban interventions on the downtown peninsula that serve to augment Vancouver’s sense of place. The first intervention will replace unnecessary car space with public space, in order to incrementally create, over a number of years, an extensive pedestrian network that links its public spaces. This will incorporate characteristics of successful urban systems found in Barcelona, Bogota, Copenhagen, Curitiba and Portland, treating the street not just as a transportation corridor but also as a public space, and a democratic forum. The second intervention will remove many low to mid-density ‘underperforming’ residential buildings, creating a diagonal pedestrian and transit boulevard that bisects the downtown peninsula, linking major public spaces such as English Bay Beach, Robson Square, and Waterfront Station. Along this diagonal, new high density mixed-use development will offer an increased number of residential, commercial and cultural facilities. The new public spaces and developments created by the proposed diagonal boulevard will provide Vancouver with a civic realm better connected than it has ever been. Vancouver will become a city of great pedestrian public spaces, strongly linked to natural surroundings that serve an active and environmentally conscious population.