Asymmetric dependence and its effect on helping behaviour in work groups 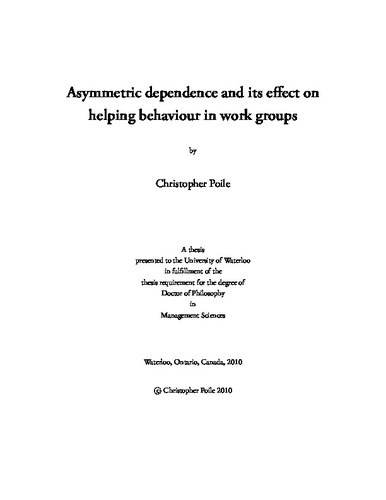 A case study of two software teams in a large American software company revealed evidence of a power imbalance and intergroup conflict. The case study was used to generate questions about the effects of task-dependence on interpersonal work relationships. Situational affordances and Heider's balance theory were used to explain how task-dependence and expectations impel helping behaviour between coworkers. The theoretical model was tested using an experimental card-game. The card-game was designed so that the task would remain the same while three factors of task-dependence were manipulated: level of dependence (low vs. high), mutuality of dependence (asymmetric vs. symmetric), and reward interdependence (individual vs. group). The goal was to isolate these aspects of task-dependence and measure their effect on helpful behaviours and intragroup conflict. The results indicated that as the level (the amount) of dependence increases, the amount of intragroup conflict increases, but so does the number of helpful behaviours. As the mutuality of dependence changes from asymmetric to symmetric, the number of helpful behaviours increases, but the intragroup conflict decreases. The experiment deepens the findings of the case study: asymmetric dependence is associated with intragroup conflict and it presents a situation where the more powerful of the two is less inclined to give help to their dependent. Unexpectedly, however, if the level of the dependence increases, the more powerful of the two will offer more help. These findings contradict the predictions of social exchange theory, interdependence theory, and the power and influence approaches. Balance theory offers an explanation: a request for help coming from a co-worker in great need creates an imbalanced cognitive situation, one with more tension than the situation created when a request comes from someone less dependent. One way the help-giver can relieve their cognitive tension is to offer help; helping a co-worker satisfies the co-worker's expectations, thereby balancing the help-giver's cognitive situation. The experiment also demonstrated that a high level of task-dependence is necessary for helpful behaviours to increase; without the ability and opportunity to help afforded by task-dependence, greater social expectation will have little effect on the amount of helping behaviour.