The High German of Russian Mennonites in Ontario 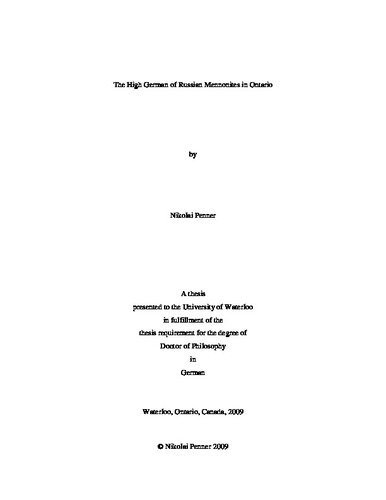 The main focus of this study is the High German language spoken by Russian Mennonites, one of the many groups of German-speaking immigrants in Canada. Although the primary language of most Russian Mennonites is a Low German variety called Plautdietsch, High German has been widely used in Russian Mennonite communities since the end of the eighteenth century and is perceived as one of their mother tongues. The primary objectives of the study are to investigate: 1) when, with whom, and for what purposes the major languages of Russian Mennonites were used by the members of the second and third migration waves (mid 1920s and 1940-50s respectively) and how the situation has changed today; 2) if there are any differences in spoken High German between representatives of the two groups and what these differences can be attributed to; 3) to what extent the High German of the subjects corresponds to the Standard High German. The primary thesis of this project is that different historical events as well as different social and political conditions witnessed by members of these groups both in Russia (e.g. closure of High German schools and churches in the 1920s and 1930s) and in Canada (e.g. the transition of most Mennonite churches from High German to English) have had a considerable influence upon and were reflected in their perception and use of High German. The data for the project consist of two sets of audio-recorded interviews in High German conducted in 1976-1978 by Henry Paetkau and Stan Dueck with Russian Mennonite immigrants of the 1920s (21 interviews), and by the author of this project in the spring of 2007 with representatives of the third migration wave (19 interviews). Both sets of interviews underwent textual and content analysis. Ten selected interviews have been transcribed following the rules of the CHAT (Codes of the Human Analysis of Transcripts) notation system and analyzed with the help of the CLAN (Computerized Language Analysis) software. The results of the study indicate that generally the patterns of language use by both groups showed a number of important differences during their stay in Russia but were found to be very similar after each group migrated to Canada. Further, no significant differences in the use of non-standard constructions between the two groups have been discovered and the main hypothesis of the study was not supported. Finally, it has been determined that the variety of High German spoken by the Russian Mennonites departs from Standard High German in a number of respects and features a variety of non-standard constructions. While some of them can be traced back to the influence of the English or Russian languages, many other non-standard constructions were most likely present in the speech of Russian Mennonites long before intensive contact with these languages began. It has been argued that some non-standard constructions were also relatively stable in the group’s High German and that they are a result of both language-internal as well as language-external processes of change.