Quantum Optoelectronic Detection and Mixing in the Nanowire Superconducting Structure 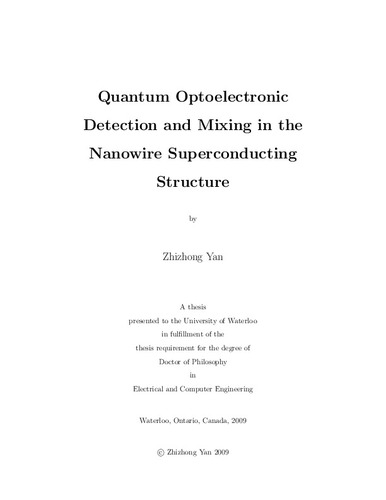 The recent advancement of superconducting nano devices has allowed for making a Superconducting Nanowire Single Photon Detector (SNSPD), whose extraordinary features have strongly motivated the research community to exploit it in many practical applications. In this thesis, an experimental setup for testing the SNSPD has been established. It contains an in-house packaging that meets the requirements of RF/microwave and optoelectronic characterizations. The quantum efficiency and detection efficiency measurements have confirmed that our approach is satisfactory. The dark count performance has reached the anticipated level. The factors affecting rise and fall times of the photoresponses are addressed. Based on the successful setup, the characterizations including dc, small signal ac measurements have been undertaken. The measurements are aimed at quantitatively investigating Cooper pair density in the superconducting nanowire. The experimental method involves a two-step, small signal S-parameter measurement either in the presence or absence of optical powers. The subsequent measurements by varying the temperature and dc bias current have achieved remarkable understanding on the physical properties of SNSPD nanowires. Then, the electrically induced nonlinearity is studied via the large signal RF and Microwave measurements. The experiments are a set of one-tone and two-tone measurements, in which either the RF driving power is varied at a fixed frequency, or vice versa. Two major nonlinear microwave circuit analysis methods, i.e. time-domain transient and hybrid-domain harmonic balance analysis, are employed. The simulation result reveals the optimized conditions of reaching the desired nonlinearity. Finally, we have successfully measured the optoelectronic mixing products in an electrically pumped optoelectronic mixer, which has identical structures as that of the SNSPD. The experiments confirm that this mixer is not only sensitive to the classical light intensities, but also to that of the single photon level. Meanwhile, the quantum conversion matrices is derived to interpret the quantum optoelectronic mixing effects.