Centralized Rate Allocation and Control in 802.11-based Wireless Mesh Networks 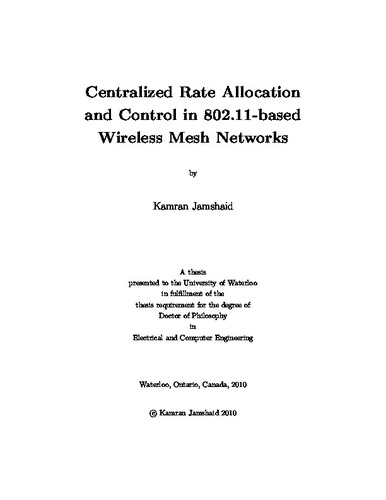 Wireless Mesh Networks (WMNs) built with commodity 802.11 radios are a cost-effective means of providing last mile broadband Internet access. Their multihop architecture allows for rapid deployment and organic growth of these networks. 802.11 radios are an important building block in WMNs. These low cost radios are readily available, and can be used globally in license-exempt frequency bands. However, the 802.11 Distributed Coordination Function (DCF) medium access mechanism does not scale well in large multihop networks. This produces suboptimal behavior in many transport protocols, including TCP, the dominant transport protocol in the Internet. In particular, cross-layer interaction between DCF and TCP results in flow level unfairness, including starvation, with backlogged traffic sources. Solutions found in the literature propose distributed source rate control algorithms to alleviate this problem. However, this requires MAC-layer or transport-layer changes on all mesh routers. This is often infeasible in practical deployments. In wireline networks, router-assisted rate control techniques have been proposed for use alongside end-to-end mechanisms. We evaluate the feasibility of establishing similar centralized control via gateway mesh routers in WMNs. We find that commonly used router-assisted flow control schemes designed for wired networks fail in WMNs. This is because they assume that: (1) links can be scheduled independently, and (2) router queue buildups are sufficient for detecting congestion. These abstractions do not hold in a wireless network, rendering wired scheduling algorithms such as Fair Queueing (and its variants) and Active Queue Management (AQM) techniques ineffective as a gateway-enforceable solution in a WMN. We show that only non-work-conserving rate-based scheduling can effectively enforce rate allocation via a single centralized traffic-aggregation point. In this context we propose, design, and evaluate a framework of centralized, measurement-based, feedback-driven mechanisms that can enforce a rate allocation policy objective for adaptive traffic streams in a WMN. In this dissertation we focus on fair rate allocation requirements. Our approach does not require any changes to individual mesh routers. Further, it uses existing data traffic as capacity probes, thus incurring a zero control traffic overhead. We propose two mechanisms based on this approach: aggregate rate control (ARC) and per-flow rate control (PFRC). ARC limits the aggregate capacity of a network to the sum of fair rates for a given set of flows. We show that the resulting rate allocation achieved by DCF is approximately max-min fair. PFRC allows us to exercise finer-grained control over the rate allocation process. We show how it can be used to achieve weighted flow rate fairness. We evaluate the performance of these mechanisms using simulations as well as implementation on a multihop wireless testbed. Our comparative analysis show that our mechanisms improve fairness indices by a factor of 2 to 3 when compared with networks without any rate limiting, and are approximately equivalent to results achieved with distributed source rate limiting mechanisms that require software modifications on all mesh routers.