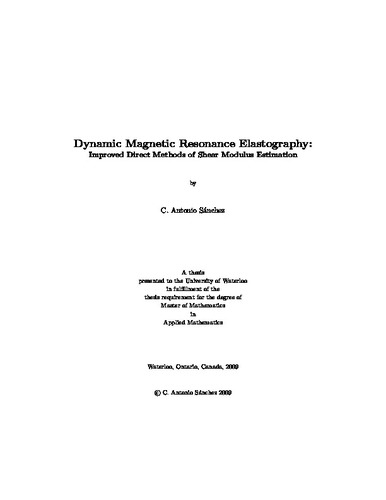 Magnetic Resonance Elastography (MRE) is a medical imaging technique used to generate a map of tissue elasticity. The resulting image is known as an elastogram, and gives a quantitative measure of stiffness in the examined tissue. The method is indirect; the elasticity, itself, is not measured. Instead, the physical response to a known stress is captured using magnetic resonance imaging, and is related to an elasticity parameter through a mathematical model of the tissue. In dynamic elastography, a harmonic stress is externally applied by a mechanical actuator, which is oriented to induce shear waves through the tissue. Once the system reaches a quasi-steady state, the displacement field is measured at a sequence of points in time. This data is the input to elasticity reconstruction algorithms. In this dissertation, the tissue is modelled as a linearly viscoelastic, isotropic continuum, undergoing harmonic motion with a known fundamental frequency. With this model, viscoelasticity is described by the complex versions of Lamé's first and second parameters. The second parameter, known as the complex shear modulus, is the one of interest. The term involving the first parameter is usually deemed negligible, so is ignored. The task is to invert the tissue model, a system of linear differential equations, to find the desired parameter. Direct inversion methods use the measured data directly in the model. Most current direct methods assume the shear modulus can be approximated locally by a constant, so ignore all derivative terms. This is known as the local homogeneity assumption, and allows for a simple, algebraic solution. The accuracy, however, is limited by the validity of the assumption. One of the purposes of MRE is to find pathological tissue marked by a higher than normal stiffness. At the boundaries of such diseased tissue, the stiffness is expected to change, invalidating the local homogeneity assumption, and hence, the shear modulus estimate. In order to capture the true shape of any stiff regions, a method must allow for local variations. Two new inversion methods are derived. In the first, a Green's function is introduced in an attempt to solve the differential equations. To simplify the system, the tissue is taken to be incompressible, another common assumption in direct inversion methods. Unfortunately, without designing an iterative procedure, the method still requires a homogeneity assumption, limiting potential accuracy. However, it is very fast and robust. In the second new inversion method, neither of the local homogeneity or incompressibility assumptions are made. Instead, the problem is re-posed in a quadratic optimization form. The system of linear differential equations is set as a constraint, and any free parameters are steered through quadratic programming techniques. It is found that, in most cases, there are no degrees of freedom in the optimization problem. This suggests that the system of differential equations has a fully determined solution, even without initial, boundary, or regularization conditions. The result is that estimates of the shear modulus and its derivatives can be obtained, locally, without requiring any assumptions that might invalidate the solution. The new inversion algorithms are compared to a few prominent, existing ones, testing accuracy and robustness. The Green's function method is found to have a comparable accuracy and noise performance to existing techniques. The second inversion method, employing quadratic optimization, is shown to be significantly more accurate, but not as robust. It seems the two goals of increasing accuracy and robustness are somewhat conflicting. One possible way to improve performance is to gather and use more data. If a second displacement field is generated using a different actuator location, further differential equations are obtained, resulting in a larger system. This enlarged system is better determined, and has improved signal-to-noise properties. It is shown that using data from a second field can increase accuracy for all methods.