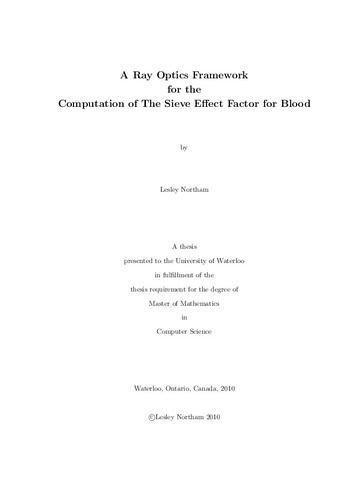 Light may traverse a turbid material, such as blood, without encountering any of its pigment particles, a phenomenon known as sieve effect. This phenomenon may result in a decrease in the amount of light absorbed by the material. Accordingly, the corresponding sieve factor needs to be accounted for in optical investigations aimed at the derivation of blood biophysical properties from light transmittance measurements. The existing procedures used for its estimation either lack the flexibility required for practical applications or are based on general formulas that incorporate other light and matter interaction phenomena. In this thesis, a ray optics framework is proposed to estimate the sieve factor for blood samples using a first principles approach. It consists in applying ray-casting techniques to determine the probability that light can traverse a blood sample without encountering any of the pigment (hemoglobin) containing cells. The thickness of the samples as well as the distribution, orientation and shape of the red blood cells are taken into account by the simulation algorithm employed in this framework. The predictive capabilities of the proposed approach are demonstrated through a series of in silico experiments. Its effectiveness is further illustrated by visualizations depicting the different blood parameterizations considered in the simulations.

Lesley Northam (2010). A Ray Optics Framework for the Computation of The Sieve Effect Factor for Blood. UWSpace. http://hdl.handle.net/10012/4942