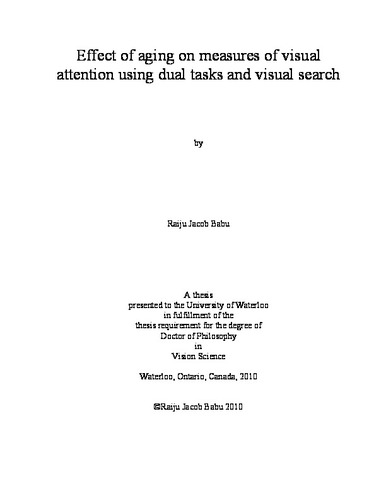 In Canada, as baby boomers age, there will be an increase in the percentage of seniors within the general population (Statistics Canada, 2006). Seniors often have difficulty in performing certain everyday tasks and have greater risk of having health issues. As such, it becomes increasingly important to understand factors that pose difficulty for this group of people. As people get older, many visual functions such as visual acuity, contrast sensitivity, and glare are known to deteriorate (Haegerstrom-Portnoy, 2005). However, when considering activities that aid mobility such as driving and walking, vision related variables are not the only ones that create difficulty for older individuals. A sensory variable such as attention, in conjunction with vision, has been shown in previous studies to be a good predictor of difficulties encountered by the elderly (McGwin, Owsley, & Ball, 1998; Owsley, McGwin, Sloane, Stalvey, & Wells, 2001). Moreover, inattention and distraction seem to be common causes of automobile accidents as well as falls. The work load imposed on the working memory can impact distractibility and inattention. In mobility related activities such as driving and walking, individuals perceive objects that are increasing in size. Experiments were designed to investigate the factors that affect the perception of targets that are enlarging in size. Size matching of expanding targets to a previously presented static target, was investigated in a group of younger participants with normal vision using central or peripheral vision. The results show that size estimates differ depending on whether the target appears in the central visual field or in the periphery. The participants respond faster to targets that appear in the periphery compared to those in the centre/midline. In the subsequent set of experiments we compared the performance of younger and older participants using a dual task paradigm where individuals had to perform two tasks concurrently, one of which was to match the size of an enlarging target. Attention was modulated in the dual tasks by varying the difficulty of the secondary task. It has been found that older individuals have difficulty processing multiple visual tasks or performing multiple tasks in general (Pashler, 1994a, 1994b, 1998; Verhaeghen et al., 2003). Compared to younger individuals, older individuals were found to have greater performance difficulty in the highly demanding dual tasks. These results are compared to those observed in studies of psychological refractory period effects. The differences between the young and older individuals are discussed with respect to limited capacity and bottle neck models of attention. Furthermore, eye movement measures in the dual tasks seem to provide evidence of difficulty in task switching for the older observers. The thesis also investigated the functional field of view of younger and older individuals. By assessing the functional field of view (FFOV) using a method employed earlier by Coeckelbergh et al., (2004a), significant overall age related differences were found. Multiple characteristics of what might affect the FFOV as measured by the attended field of view (AFOV) were also investigated (e.g., impact of a pop out distracter and divided attention). It was found that differences between the two age groups occurred in all conditions. The presence of irrelevant distracters had a greater impact on the older individuals compared to the younger group, whereas divided attention or the presence of the pop out distracter did not affect either age group. Attention processing seemed to be similar for both the younger and older individuals and, therefore, the differences between the age groups appear to be at a quantitative level rather than a qualitative level.