Healing Through Presence: The Embodiment of Absence in the Plays of Daniel David Moses 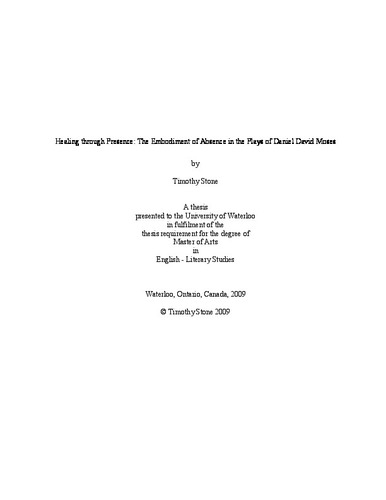 ABSTRACT In this thesis, it is argued that the performance of three plays written by Daniel David Moses: Brébeuf's Ghost, The Indian Medicine Shows and Almighty Voice and his Wife function as healing ceremonies. This healing - so necessary after the cultural genocide wrought upon First Nations peoples by the Canadian government's attempts to legislate and educate them out of existence - is brought about through Moses' examination of the dichotic underpinnings of euro-western notions of absence and presence and how this dichotomy leads to conflict between the euro-western concept of disease as a purely physical phenomena and the indigenous view of disease as being the physical manifestation of spiritual imbalance, of not living in accord with the land. The link Heidegger makes between absence and the essence of things - an example of this being his assertion that the essence of a wine jug "does not lie at all in the material of which it consists, but in the void that holds" ("The Thing" 169) - is representative of the viewpoint of the euro-western characters of the play, most of whom base their understanding of the world and the things in it on their perception of voids. For both euro-western and native characters in these plays, physical and psychological disease is linked to the idea of absence. Disease, as a social construct, is argued as a manifestation of the physical and spiritual voids created by a preoccupation with absence. The euro-western relationship to 'things' and commodities to fill the absence of 'self' is. I argue that the performance of the text is a type of ceremony designed to physically manifest the spiritual, akin to such rituals as the Hopi katina ceremony and the Navajo red ant ceremony, whose aims are to restore the wellness of an individual and, thus, the group. It is the performance of absence which is the key to understanding the works' healing value.

Timothy Stone (2010). Healing Through Presence: The Embodiment of Absence in the Plays of Daniel David Moses. UWSpace. http://hdl.handle.net/10012/4940