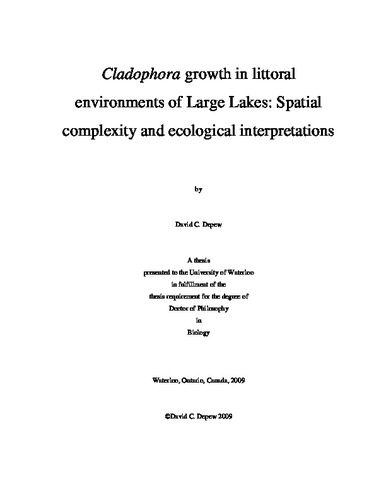 This thesis brings together a variety of new and evolving technologies in an attempt to characterize spatial variability in highly complex near shore areas of the Laurentian Great Lakes in order to provide methods and mechanisms of answering ecological questions in the presence of dynamic and heterogeneous environmental conditions. A high frequency echosounder was used to detect and characterize the nuisance macroalgae (Cladophora) that currently blooms along many of the lower Great Lakes shorelines. Detection of algal stands that were of high biomass and therefore likely to be considered a nuisance was largely successful and robust. Detection of short stands and those of low biomass were limited by the acoustic resolution of the system. Attempts to use average backscatter strength and integrated scattering volume as predictive metrics to estimate standing crop were largely unsuccessful, likely due to the inability of completely excluding reverberation from the substrate and the presence of invertebrates within the algal mats. This acoustic system was subsequently used during near shore mobile surveys to map the distrubtion of Cladophora at several locations in Lakes Ontario, Erie and Huron. Cladophora was detected with the acoustic unit at all sites in Lakes Ontario and Erie, including at offshore shoals, far removed from catchment influence. Cladophora was not detected at any of the Lake Huron sites and visual observation combined with underwater camera work confirmed that Cladophora did not accumulate to levels that would be detecable with acoustics, or was absent entirely. Nutrient conditions varied surprisingly little among sites, and did not readily explain the differences in Cladophora distribution from site to site. In contrast, dreissenid mussel abundance was significantly associated with Cladophora biomass, likely due to their effects on water clarity and nutrient regeneration in the benthos. Despite the strong association between dreissenid abundance and Cladophora biomass observed during the multi-lake surveys, urbanized catchments contain a multitude of potential shoreline nutrient sources which may contribute to the current patterns of Cladophora growth. No compelling evidence for nutrient supply from shoreline sources or municipal waste water treatment plants was observed, and although some degree of spatial association between Cladophora growth and tributaries was observed at one of the study sites, the widespread nature of Cladophora growth in conjunction with a lack of nutrient enrichment evidence argues against shoreline sources as a significant cause. Although much of the spatial variation of water masses and phytoplankton in the near shore is structured by hydrodynamic processes, some evidence exists that the extensive beds of Cladophora may have some ability to affect the overlying water chemistry and water quality. Patterns of dissolved gases in the near shore were largely consistent with the demand for CO2 and the release of O2 by Cladophora in the summer months when biomass and areal cover were high. Furthermore, changes in phytoplankton photosynthetic efficiency were consistent with changes in nutrient and CO2 levels, suggesting that perhaps the interplay between benthic algae and pelagic phytoplankton may be important in the shallow waters. Although Cladophora is a major component of the lower Great Lakes benthic community, it does not reach comparable levels in Lake Simcoe despite comparable water clarity, phosphorus concentrations and dreissenid mussel abundance to the lower Great Lakes. The difference in physical size between Lake Simcoe and the Great Lakes may partly explain the relative lack of Cladophora growth in Lake Simcoe, perhaps through reduced turbulence or reduced physical disturbance that allows for invertebrate grazers to maintain high abundances relative to the Great Lakes where mussel shells are pulverized to fine grained material that eliminates invertebrate refuge. Differences in water chemistry may also be important; dissolved silica concentrations in Lake Simcoe are comparable to those measured in the upper Great Lakes and do not drop below the threshold for silica limitation of phytoplankton or benthic algae. This may prevent Cladophora from outgrowing its epiphyte coating, leaving Cladophora in a state of nearly continuous light limitation. Although Cladophora did not respond in Lake Simcoe as it did in the lower Great Lakes to dreissenid invasion, macrophyte growth has clearly increased. Macrophyte growth covered nearly 100% of Cook’s Bay to a depth of 8 m, and macrophytes were observed at depths of up to 10 m. It appears that while historical nutrient loading as provided the nutrient rich sediment in Cook’s Bay, dreissenids have supplied the significant increase in water clarity, that has allow for the expansion of macrophytes into deeper water.