A Multilevel Method for Image Segmentation 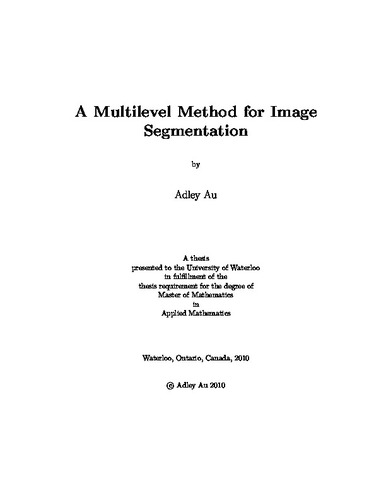 Image segmentation is a branch of computer vision that has received a considerable amount of interest in recent years. Segmentation describes a process that divides or partitions the pixels of a digital image into groups that correspond to the entities represented in the image. One such segmentation method is the Segmentation by Weighted Aggregation algorithm (SWA). Inspired by Algebraic Multigrid (AMG), the SWA algorithm provides a fast multilevel method for image segmentation. The SWA algorithm takes a graph-based approach to the segmentation problem. Given an image Ω, the weighted undirected graph A = (N,E) is constructed with each pixel corresponding to a node in N and each weighted edge connecting neighbouring nodes in E. The edge weight between nodes is calculated as a function of the difference in intensity between connected pixels. To determine whether a group of pixels should be declared as a segment in the SWA algorithm, a new scale-invariant measure to calculate the saliency of the group of pixels is introduced. This new measure determines the saliency of a potential segment by taking the ratio of the average similarity to its neighbours and its internal similarity. For complex images, intensity alone is not sufficient in providing a suitable segmentation. The SWA algorithm provides a way to improve the segmentation by incorporating other vision cues such as texture, shape and colour. The SWA algorithm with the new scale-invariant saliency measure was implemented and its performance was tested on simple test images and more complex aerial-view images.