Trophic disruption effects on the diet and condition of Lake Whitefish 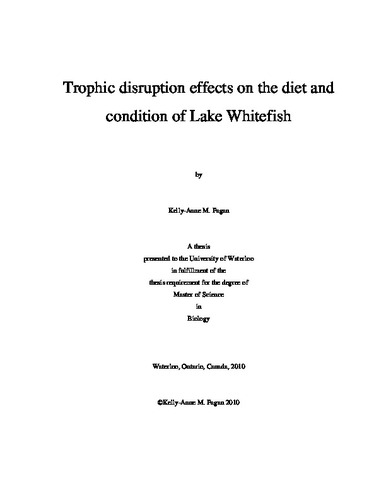 Recently, the growth and condition of Lake Whitefish (Coregonus clupeaformis), an important commercial fishery commodity, has declined in some areas of the Great Lakes. As Lake Whitefish are benthic feeders, historically the bulk of their diet was made up of the energy rich Diporeia hoyi, an amphipod whose abundances declined concurrently with reductions in Lake Whitefish growth and condition. Lake Whitefish populations from lakes Michigan, Erie and Superior have been used to determine whether there is a plausible link between the declines in Lake Whitefish condition and Diporeia abundance as indicated by stable isotope analysis, dietary and condition indices for Lake Whitefish. The first study was Lake Michigan specific and tested the hypothesis that condition, in terms of relative weight, percent lipid and docosahexaenoic acid (DHA), improved as the proportion of high quality prey (e.g., Diporeia) in the diet increased. Samples of spawning whitefish from four regions (northwest, Naubinway, Elk Rapids and southeast) around Lake Michigan had distinct mean carbon and nitrogen isotope signatures. The signatures indicated Lake Whitefish may be using a variety of prey items, especially the Naubinway population where fish occupy the largest isotopic niche space. Relative weight was significantly higher in the southeast and lower for all northern regions. The mean measured lipid from Lake Whitefish dorsal skinless muscle biopsies was highest for northwest region fish. DHA was significantly different among studied regions, with higher mean values in Elk Rapids and the northwest. No linear relationships between stable isotope measures and condition metrics were found. These results suggest that Lake Whitefish are coping with declining Diporeia abundances by feeding on alternate prey. Results do not substantiate the hypothesis of a relationship between condition and prey use, although Lake Whitefish from Elk Rapids and the northwest had high quality prey and good condition. The second study incorporated eight spawning populations around lakes Michigan, Erie and Superior to determine if there were differences in energy available to female Lake Whitefish. The hypotheses tested were three fold: (1) observed differences in growth and reproduction among populations were driven by energy availability, (2) populations with low energy reserves exhibit reproductive trade-offs and (3) high energy reserves are related to Diporeia consumption. Lake Whitefish from lakes Erie and Superior both displayed high growth and no trade-offs between egg size and number. Populations from Lake Michigan all had low investment in growth, significantly lower gonadosomatic index (GSI) and four of these populations displayed significant trade-offs between egg size and number. Growth and GSI tended to increase with mean total lipid stored in muscle and populations displaying reproductive trade-offs had significantly lower muscle lipid, however, these trends were not evident when using DHA as a measure of good nutrition. No relationship was evident between Diporeia consumption and populations with high muscle lipid stores. Overall, my results suggest that while changes in the availability of prey resources has had an effect on Lake Whitefish populations, the impact of declining abundances of Diporeia alone cannot explain the systemic changes in Lake Whitefish condition across the Great Lakes basin.