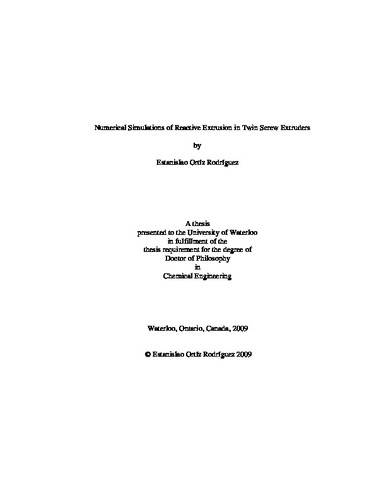 In this work, the peroxide-initiated degradation of polypropylene (PP) in co-rotating intermeshing twin-screw extruders (COITSEs) is analyzed by means of numerical simulations. This reactive extrusion (REX) operation is simulated by implementing (i) a one-dimensional and (ii) a three-dimensional (3D) modeling approach. In the case of the 1D modeling, a REX mathematical model previously developed and implemented as a computer code is used for the evaluation of two scale-up rules for COITSEs of various sizes. The first scale-up rule which is proposed in this work is based on the concept of thermal time introduced by Nauman (1977), and the second one is based on specific energy consumption (SEC) requirements. The processing parameters used in testing the previously referred to scale-up approaches are the mass throughput, the screw rotating speed, and the peroxide concentration, whereas the extruder screw configuration and the barrel temperature profiles are kept constant. The results for the simulated operating conditions show that when the REX operation is scaled-up under constant thermal time, very good agreement is obtained between the weight-average molecular weight (Mw) and poly-dispersity index (PDI) from the larger extruders and the values of these parameters corresponding to the reference extruder. For the constant SEC approach, on the other hand, more significant variations are observed for both of the aforementioned parameters. In the case of the implemented constant thermal time procedure, a further analysis of the effect of the mass throughput and screw speed of the reference device on the scaled-up operation is performed. It is observed that when the lower mass throughput is implemented for the smaller extruder keeping a constant screw speed, the predicted residence times of extrusion for the larger extruders are lower, in general terms, than those corresponding to the reference device, and a converse situation occurs for the higher implemented value of the mass throughput. Also, in general terms, the higher increase of the reaction temperature on the scaled-up operation corresponds to the lower mass throughputs and higher screw speeds specified for the reference extruder. For the 3D modeling approach, two different case studies are analyzed by means of a commercial FEM software package. The REX simulations are performed under the assumption of steady-state conditions using the concept of a moving relative system (MRS). To complement the information obtained from the MRS calculations, simulations for selected conditions (for non-reactive cases) are performed considering the more realistic transient-state (TS) flow conditions. The TS flow conditions are associated to the time periodicity of the flow field inside the conveying elements of COITSEs. In the first case study, the peroxide-initiated degradation of PP is simulated in fully-filled screw elements of two different size COITSEs in order to evaluate scale-up implications of the REX operation. In the second case, the reacting flow is simulated for a conventional conveying screw element and a conveying screw element having a special design and corresponding to the same extruder size. For both of the analyzed cases, the effects of the initial peroxide concentration and mass throughput on the final Mw and PDI of the degraded resin are studied. The effect of the processing conditions is discussed in terms of the residence time distribution (RTD), the temperature of reaction, and the distributive mixing capabilities of the REX system. When analyzing the scale-up case, it is found that for the implemented processing conditions, the final Mws and PDIs are very close to each other in both of the analyzed flow geometries when the specified flow is close to that corresponding to the maximum conveying capabilities of the screw elements. For more restrictive flow conditions, the final Mws and PDIs are lower in the case of the screw element of the larger extruder. It is found that the distributive mixing ability of the reactive flow is mainly related to the specified mass throughput and almost independent of the specified peroxide concentration for a particular extruder size. For the analyzed screw elements, the conveying element corresponding to the small size extruder shows a slightly better distributive mixing performance. For this same case study, a further evaluation of the proposed scale-up criterion under constant thermal time confirms the trend of the results observed for the 1D simulations. In the second case study, the special type of screw element consists of screws rotating at different speeds which have different cross sections. In this case, the outer and inner diameters of both the special and the conventional type of screw elements are specified to be the same. As in the previous case study, the distributive mixing capabilities appear to be independent of the specified peroxide concentrations but dependent on the mass flow rate. It is speculated from the simulation results, from both the transient- as well as the steady-state flow conditions, that the screw element with the special design would yield lower final values of the PDI and Mw. Also, this screw element appears to have improved distributive mixing capabilities as well as a wider RTD.