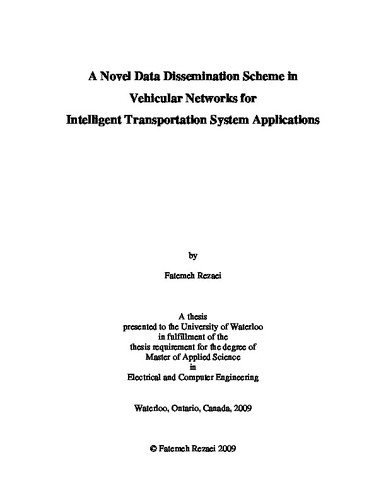 Numerous local incidents occur on road networks daily many of which may lead to congestion and safety hazards. If vehicles can be provided with information about such incidents or traffic conditions in advance, the quality of driving in terms of time, distance, and safety can be improved significantly. Vehicular Ad Hoc Networks (VANETs) have recently emerged as an effective tool for improving road safety through the propagation of warning messages among the vehicles in the network about potential obstacles on the road ahead. This research has presented an effective warning data dissemination scheme which deploys relay strategy and concept of Region of Interest (RoI). A warning data message is characterized as spatio-temporal, implying that both the location and the time of an incident must be considered. Factors such as the type of warning message, the layout of the road network, the traffic density and the capacity of alternative roads are influential in determining the RoI in which the warning message needs to be propagated. In the developed scheme, the type of warning message is taken into account for the determination of the RoI so that the more severe the incident, the wider the RoI. In the selection of the relay point, the border relay area in which the relay point is placed, is adapted to the traffic density so that the higher the traffic density , the narrower the relay area. Traffic statistics are used to calculate the RoI, which is then enclosed in the warning message so that the message is not retransmitted beyond the RoI. Also, the responsibility for retransmitting the message is assigned to the relay node. The data is then disseminated effectively so that vehicles in areas unrelated to the incident are not informed. The primary objective of this research is to provide better understanding of the dissemination of warning data in the context of a vehicular network with the ultimate goal of increasing the possibility of using VANETs for safety applications.