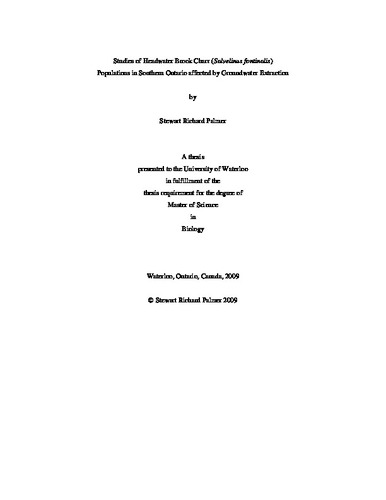 Habitat conditions, use and preference, size-at-age, density and condition were assessed for headwater brook charr (Salvelinus fontinalis) populations in streams in Southern Ontario where water extraction was occurring. Research was divided into two separate, but related studies, conducted during the summer and fall of 2002 and 2004. The first study sought to document the habitat conditions that influence size-at-age and density of age-0 brook charr and to test the hypotheses that: [1] differences in fork-lengths among sites were principally influenced by differences in stream thermal regimes as measured by accumulated thermal units (ATUs), with differences in stream physical characteristics (e.g., water quality, morphology, riparian vegetation) also having significant effects; [2] among-stream differences in flow regimes would significantly influence among-stream differences in age-0 densities, with increases in flow being positively correlated with density; and, [3] length and density would be negatively correlated. Results indicated that differences in temperature, stream site and flow influenced differences in age-0 length and density of brook charr. The effect of temperature, as measured by accumulated thermal units, dominated other influences, providing strong support for the null hypothesis [1] that size differences among sites were primarily driven by differences in the prevailing thermal regime. Some evidence was found to suggest that differences in stream physical characteristics influenced fish size and density, with stream flow affecting both to a moderate degree. Thus while study results provide support for the hypothesis [2] concerning flow-related impacts on age-0 brook charr in headwater streams, changes in flow cannot be considered of prime importance over the range of stream discharge differences (14.3-28.5 L•s -1) observed here. Finally, there was no support for hypothesis [3] concerning the negative correlation between age-0 fork-length and density. The second study investigated the effects of municipal groundwater pumping on stream habitat and the resident brook charr population of Monora Creek, Orangeville, Ontario. Specifically, the study aimed to test the hypotheses that: [1] well-related water extraction was associated with habitat degradation at sites proximate to the extraction point; and, [2] degraded habitat was associated with reduced juvenile and adult brook charr use and preference, reduced occupancy density and reduced condition. Study results indicated significant, although subtle, changes in available habitat as a result of pumping activity, with habitats in areas impacted by groundwater pumping showing significant decreases in hydraulic gradient, stream depth and the availability of under-cut bank and run and pool habitat. Combined, the changes in habitat influenced use, with age-0 densities declining in stream reaches impacted by pumping relative to reaches of the stream not impacted by pumping. When adjusting for the relative availability of groundwater extraction on affected and non-affected habitat, standardized habitat preference indices indicated a significant preference for non-affected stream reaches among age-0 brook charr. Adults evidenced only slight changes in distribution among the available habitats that were seasonally dependent, with reduced densities observed in affected habitats and increased densities in non-affected habitats noted only in the fall. Changes in brook charr condition (weight-length relationship) and mortality were generally not in evidence during the course of this study. Combined, these studies suggest development actions moderating either the thermal or flow regime of streams will have negative effects on population status. Water extraction risks altering habitat in unfavourable ways by interrupting important linkages between flow and temperature that favour growth and density, but that prevent critical physiological thresholds for temperature from being surpassed. Furthermore, the impacts on brook charr populations subjected to moderating pumping appear to relate more to patterns of within stream distribution and habitat use than to any direct measures of fitness such as survival or growth. The latter result suggests monitoring abundance and/or condition alone will not suffice to provide early warning of population stress responses to water extraction activities.